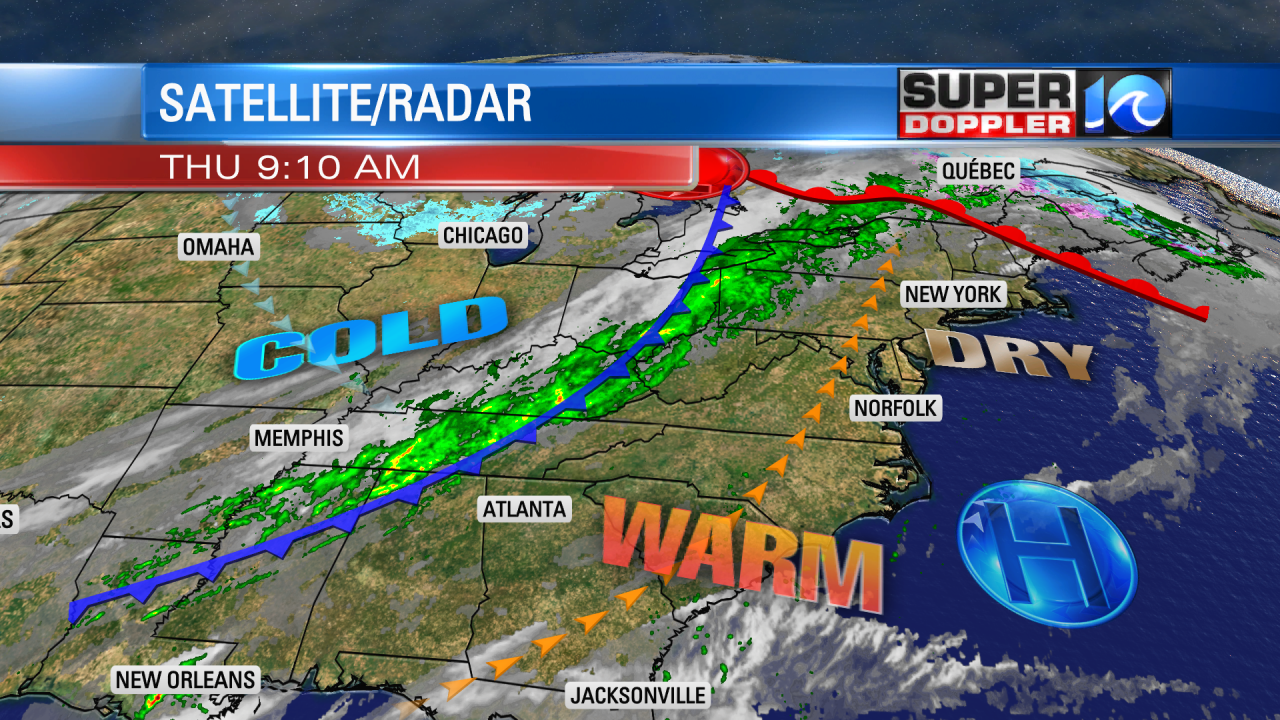 Today’s weather will be more like late summer than mid or late fall. The high temperatures will heat up a bit, and the humidity will also increase a bit. We have a warm front in the north with a strong cold front in the west.

High pressure is offshore. We will have a constant breeze from the southwest throughout the day with gusts up to 25mph. We will also have a lot of sun with some afternoon clouds. This will push the high temperatures into the upper 70s.

There may be a few 80s inland / south, but there won’t be too many. Dew points will increase until the 50’s above near 60. It’s still not bad, but it won’t be as “dry” as it has been lately. It should actually be nice with the breeze. We won’t have rain during the day, with the exception of a few isolated showers on the Outer Banks.

By tonight, the cold front will move closer to the west. We will have mostly cloudy skies. There will be scattered rain showers late. They will start around midnight and go until around 3-4 am.

Hopefully there will be a little more cover for the rain as we still really need it. However, I also hope that it clears a bit earlier so that we can see the lunar eclipse (more details in a moment).

The front will move offshore by tomorrow morning. We will have clear skies early. Then we will have a lot of sun all day with some clouds. However, the wind will be north / northwest at 10-15 mph with gusts to 25 mph. This will keep the temperatures high until the low 50s.

Regarding tonight’s eclipse, here is the latest info: Although it is a sight to see, unfortunately we are going to have quite a few clouds in our area. The event will start around 2:18 a.m. We will likely be mostly cloudy with scattered rain showers by this time. The eclipse will peak around 4:00 a.m.

Now it will be almost a complete lunar eclipse for our region. There is only a thin sliver of the moon that will not be covered by the Earth’s shadow. The eclipse will then decrease between 4.30am and 5.45am. It will end around 5:47 am. Although there are a lot of clouds at this time, I hope there will be some clearance between 4.30am and 5.45am. At least in some parts of the interior.

I am hopeful but not optimistic.

In the News of the World… While the headlines have covered many major natural disasters this year, it’s sobering to know that not all activity has been off the charts. In fact, the United States is below average for tornadoes this year. No EF-5 tornado occurred. (Fortunately). Additionally, although we have completed the normal list of names in the Atlantic for tropical systems, the overall amount of tropical activity is declining in the northern hemisphere. This is mainly due to a calmer period in the Pacific, and this in turn is due to the weather pattern of La Nina (cooler water). Here’s a link with more details on that: American tornado and northern hemisphere tropical cyclone activity down this year.

Does cheese really make you dream?