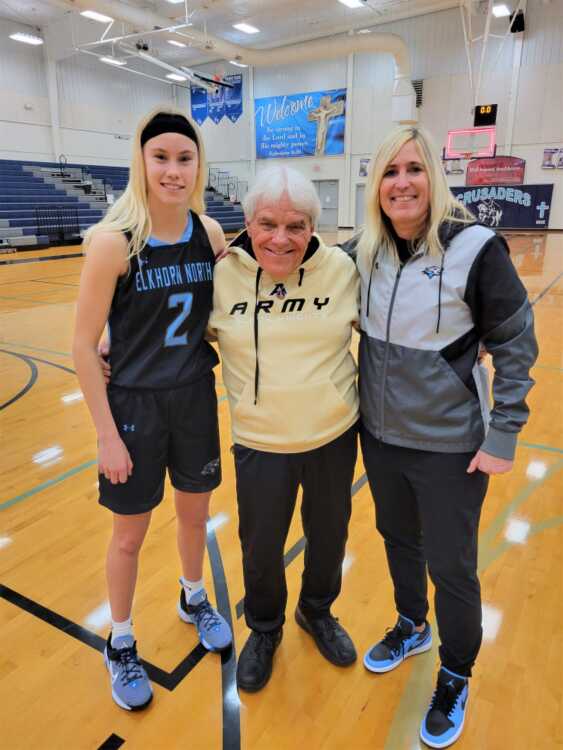 Britt Prince (L) and her mother, head coach Ann Prince (R) simply left me in a daze after watching their big win against a great team from Broken Bow.

Santa left a late Christmas present outside my front door a week ago when I found out that the girls from Elkhorn North and Broken Bow would meet at the GICC just across the fence from My house. Even better, they asked me to do the PA for this meeting.

You know, I’ve seen countless high school boys’ and girls’ sports teams compete against each other over the years. I was lucky enough to attend a series of 39 state basketball tournaments, 35 state track and field meets without a miss. I never missed a state football final at Memorial Stadium in Lincoln until a senseless fall from a ladder left me with a broken right collarbone and dislocated shoulder that prevented me To drive.

I’m old enough to have witnessed women’s basketball from an early age, when Nancy Kindig and her teammates at Hastings St. Cecilia destroyed everyone en route to a 66-game winning streak.

I watched West Point Central Catholic a handful of times as the great Megan Neuvirth led these girls to a state-record 111-game winning streak. Neuvirth told me last April, when she and I were inducted into the Nebraska High School Sports Hall of Fame, that she had never suffered a loss in high school. imagine that

I was GI Northwest’s assistant when Seward, along with one of my favorites, Beth Bohuslavsky, came to town amid a 104-game winning streak.

I’ve been lucky enough to see the Sandy Creek girls several times during their 95-game winning streak. I then interviewed Carrie Eighmey from that school, who is now the head women’s basketball coach at UNK.

I also remember Darcy Stracke, Nebraska’s all-time leading scorer, telling me that in her youth she slept with a basketball instead of a stuffed animal and dribbled that same ball from her house in downtown Chambers, then did the same on the trip home.

Since time 11 all-time leading scorer Jina Johansen was a freshman at Centura, currently (head coach women’s basketball @Hastings College) I would always have her reach out and touch mine , comparing how much smaller mine was compared to his. No wonder she’s such a bad ball handler.

Coach Ann Prince, her daughter Britt and the rest of Elkhorn North’s tight-knit basketball team played like a symphony, blending like a well-rehearsed orchestra, with Ann Prince conducting the 32-minute orchestral piece that ended with a resounding fortissimo ending, an 89-31 victory over a very fine team in Broken Bow, coached by a fearless leader in Kelly Cooksley.

11-3 Broken Bow, along with Big Jim Scott’s daughters Kya and Kailyn, went for it in the first quarter, keeping pace in a 23-16 opener. But Elkhorn North hit the opening note of the contest when the incredible Britt Prince picked the pocket of a Bow ball handler, gliding from coast to coast for silky smooth layup.

The piece elicited an odd response from head coach Ann Price, as the concertmaster exclaimed “Too easy, too easy!” Britt Prince repeated a steal and score performance on Bow’s second trip to the floor, eliciting the same “too easy” response from Ann Prince.

There had to be some significance in Coach Prince’s response to Britt’s opening volley and score that, in my simple basketball mind, I didn’t understand.

All was well though, as Wolves, like Poetry in Motion, took a 23-16 lead in the opening stanza, ran away with it in the second quarter with a 23-2 run, en route to a 23-2 advantage. 60-22 at halftime. on a proud Bow team, which never stopped fighting.

The near-perfect performance of this Elkhorn North team hit me hard last night. I understand the difference between Class C-1 and a reigning Class B state champion basketball team, but the superior mechanics, nearly flawless performance, and pure harmony that this Elkorn North unit has displayed last night were breathtaking.

Now remember, a year ago, Ann Price led this team to a state championship the FIRST YEAR this school existed. I could be wrong, but I certainly don’t recall any school having achieved such a thing at any time in the history of women’s basketball.

I could write a book about the amazing Britt Price, Ann’s concertmaster on the basketball court, but it’s more than Britt on that Elkhorn North basketball team.

Oh, by the way, if you think Elkhorn North is a One-Man team, think again. Besides sophomore Britt Prince 5-11, there’s Grace Heaney junior 6-2, Hannah Nadgwick junior 5-11 and a pair of seniors 5-9 in Reilly Palmer and Molly Bruggeman.

All can score and can they RUN! The instant the defensive rebound is downed by one of those Wolves girls, this Elkhorn North team blasts blocks and terrain faster than a sneeze through a screen door.

And DEFENSE. The lateral movement and ability to stick to a ball handler like glue without clogging is outstanding. A good illustration of this is the fact that they are getting rid of their competition by an average of 72-33 per game. Only undefeated Omaha Skutt scored or 50 points in Ann Prince’s side and it was a night where illness and disease plagued Wolves.

I can only hope I get assigned an Elkhorn North girls game at the state basketball tournament. The 14-1 Wolves, who are currently ranked No. 10 in the all-class rankings published by Mike Patterson @ the Omaha World-Herald, are a must for this guy.

So polite, so disciplined, so smooth and harmonious on the pitch, this Elkhorn North team left me in a daze last night, and watching Britt Prince and the girls play under Ann Prince caused a sleepless night.

And let’s not forget to salute Broken Bow head coach Kelly Cooksley and her daughters for playing this game. I don’t know who set up this match between classes and why it was at the GICC, but it was meant to benefit those Bow girls, despite the lopsided final score.

I saw those girls from Broken Bow defeat a really great team from Auburn last Saturday at the Nebraska Girls basketball Classic, an event created by Coach Cooksley, so I can assure you Kelly’s girls can play flat and much of this can be attributed to her superior knowledge of the game of women’s basketball.

In my opinion, Kelly Cooskley is one of the best women’s basketball coaches in the state and will continue to be successful no matter what program he leads. The passion he shows puts him in the august company of coaches like Ann Prince.

More likely than not, you’ll see this Bow team in Lincoln as part of the C-1 State Tournament.

I just can’t close this story without mentioning how thrilled I was to see former high school football star Pierce and 1,000 yard rusher Mark Prince at last night’s game. In 1985, the 5-foot-10, 175-pound Prince not only rushed for 1,193 yards on offense, but was also named to the Class C-1 All-State team as a DEFENSIVE LINER.

Mark Prince was a badass at the time and happens to be Ann’s husband and Britt’s father. Anyone want to talk about bloodlines here?

I had the pleasure of meeting you last night, Mr. Prince.