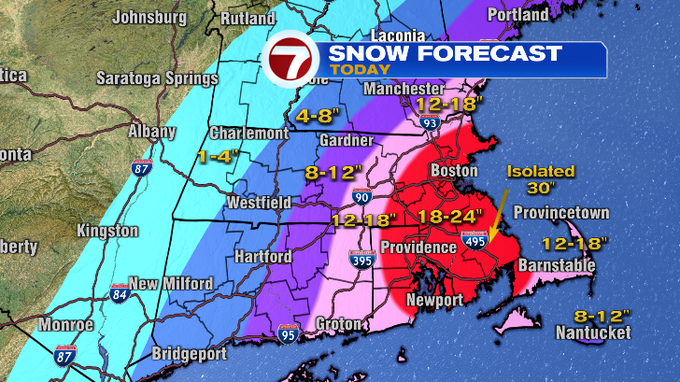 A blizzard warning remains in effect for eastern MA until midnight, with winter storm warnings for Worcester Co and parts of southern NH.

We will continue to see pockets of snow bands creeping in with snowfall rates of 1-3″ per hour throughout the afternoon (some isolated snowfall rates of 2-4″ per hour cannot be ruled out), which will certainly reduce visibility and quickly increase snow on the ground, making it difficult for snowplows to stay on top of road conditions. The snow begins to peel off in intensity around 7 p.m. and will continue to lift until 11 p.m.

If you’re wondering when would be the best time to shovel, you might want to tackle it in rotation.

As for snow totals, we’re still on track for 1-2 feet of snow for most of eastern MA, with those totals decreasing the further north and west you go into Worcester County and Southern NH.

We saw strong gusts of wind this morning, with the South Shore and Cape Town seeing gusts of over 60 mph. Expect power outages throughout the day if you haven’t already.

Another hazard is coastal flooding, and we saw the crashing waves along the south shore this morning, particularly Scituate at high tide. A coastal flood warning remains in effect until 11 a.m., then a coastal flood advisory comes into effect at 7 p.m. for tonight’s high tide at around 9 p.m.

When you factor in wind coupled with heavy snow, we are looking at blizzard conditions. For this storm to be considered a blizzard, there would have to be snowfall, visibility of 1/4 mile or less, and gusts greater than 35 mph for 3 consecutive hours.

Join our newsletter for the latest news straight to your inbox