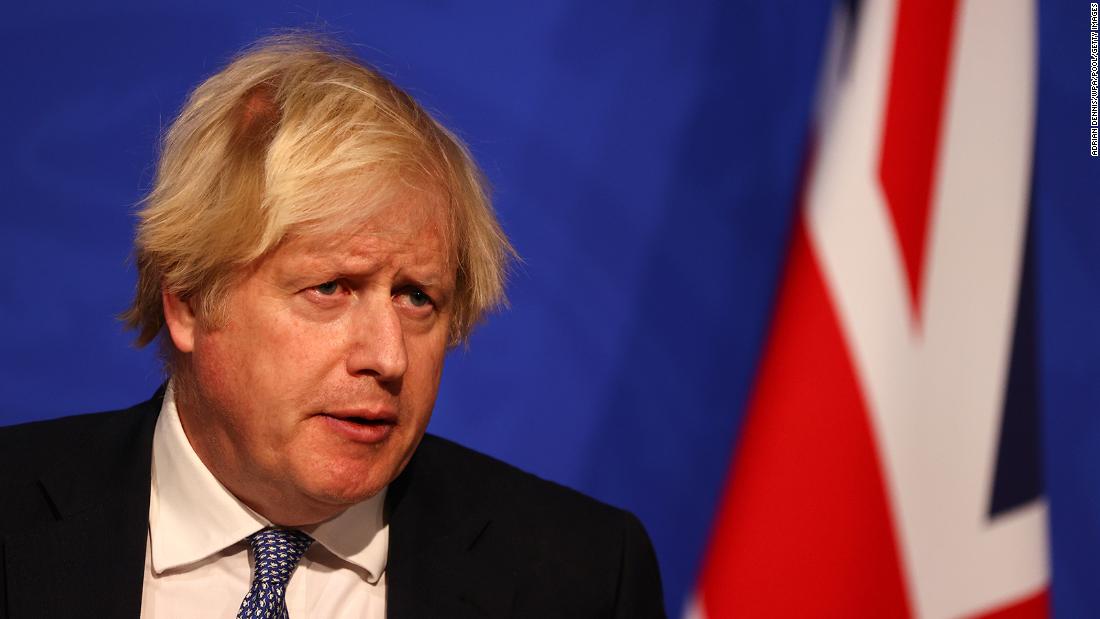 In the photo, Johnson is pictured on a screen, where he is seen in his office sitting next to two other people, reading questions, according to The Mirror.

CNN has not independently verified the details of the quiz night, which the Mirror said took place on December 15. A spokesperson for Downing Street said it was a “virtual quiz” and Johnson “briefly participated virtually” to thank the staff.

While the photo shows Johnson with just two other people, a source told the Mirror that “many staff members have gathered in front of computers, asking questions and pushing back the sparkling, wine and beer,” a claim which CNN has not independently verified.

According to the official guidelines of the time, “although there are exemptions for work purposes, you should not have a lunch or Christmas party at work, as it is a predominantly social activity and n is not otherwise permitted by the rules of your level “.

London was subject to Level 2 restrictions at the time of the quiz, which stated that there should be no mixed household inside, except for the so-called Support Bubbles and a maximum of six people outside.

After speaking to several officials, CNN established that social gatherings did take place over two days – November 27 and December 18 – and confirmed a Daily Mirror report that Johnson himself gave an impromptu speech at the premiere. Sources also confirmed reports that secret gifts from Santa Claus were exchanged on December 18.

Johnson and other senior Tories have denied any rules were broken.

In response to the Mirror report on the alleged December 15 quiz night, Released on Saturday evening, a Downing Street spokesperson told CNN in a statement: “This was a virtual quiz. Downing Street staff often had to be in the office working on the pandemic response, from so that those who were in the office for work could attend practically from their desks.

“The Prime Minister briefly took part in a virtual quiz to thank the staff for their hard work throughout the year,” the spokesperson added.

Asked about the Mirror’s story on the BBC’s The Andrew Marr Show, Education Secretary Nadhim Zahawi suggested people could judge for themselves whether the rules were broken, adding that many Downing Street employees did not were unable to work from home while responding to a national emergency.

“These are people who work together … There is no drink here. I don’t think there is any rule against recognizing Christmas with garlands or a hat,” he said. declared.

“Ten to 15 minutes to thank his team for working hourly, on a virtual screen in a pub quiz – I think people can make up their own mind on that.”

Labor leader Keir Starmer told the same BBC show that the allegations about the quiz needed to be investigated, but “it is very difficult to see how this is against the rules.”

Angela Rayner, vice-chair of the opposition Labor Party, tweeted that Johnson had “presided over a culture of rule disregard at the heart of government.”

She added: “Despite repeated denials, it now turns out that there were many parties, rallies and the Prime Minister even took part in a festive quiz.”

The Labor Party press office tweeted that on December 15 last year, Starmer wrote to Johnson “calling on him to urgently summon COBRA to discuss the worsening Covid situation.” The UK government’s Cobra Committee is an interdepartmental group that can be convened in national emergencies.

“Now we know that the Prime Minister instead held a Covid-breaking Christmas quiz that night,” the Labor Party tweet continued.

On December 17, the government sent a tweet warning “you must not have lunch or a Christmas party at work, as it is a primarily social activity.”

Johnson responded to the allegations, telling the House of Commons on Wednesday “I was furious to see this clip,” adding: “I have been assured on several occasions since these allegations emerged that there was no gone and that no Covid rule had been broken. “

New allegations emerged Thursday and Friday. Jack Doyle, then Deputy Director of Communications and now Johnson’s most important press chief, addressed a gathering of “up to 50” at the Dec. 18 party and presented award certificates to the staff, CNN affiliate ITV News reported Thursday.

Downing Street and Doyle both declined to comment on CNN as “there is a review underway.”