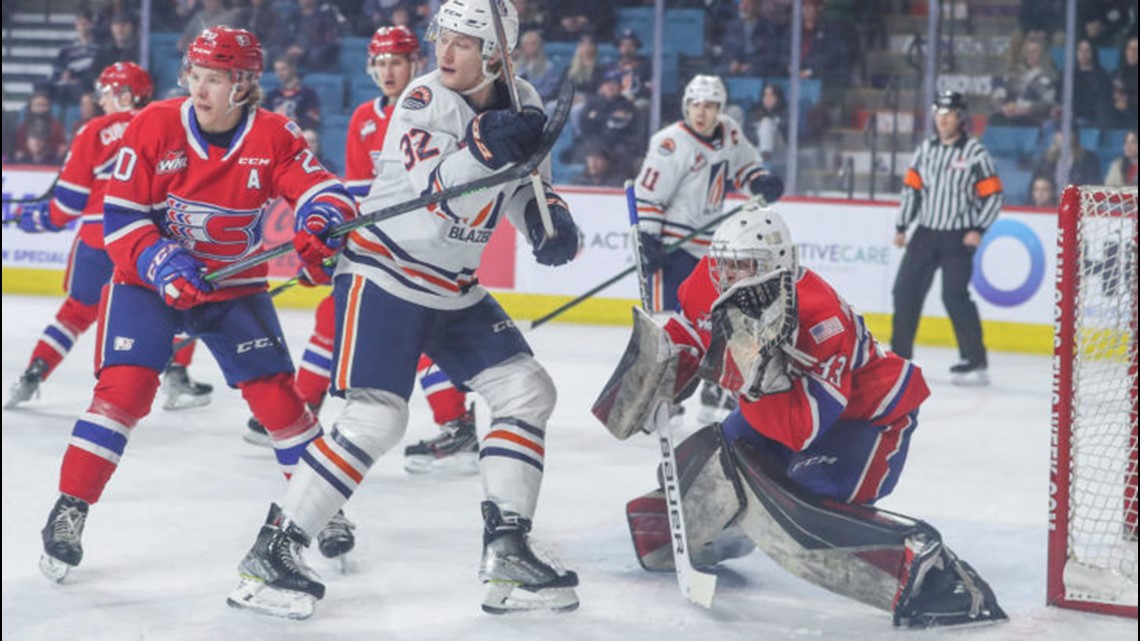 It’s going to be an interesting offseason for the Chiefs, but there’s no doubt this team is heading in the right direction.

SPOKANE, Wash. — Only two teams had ever overcome a 3-0 deficit in a Western Hockey League playoff series and while the Chiefs came a long way to becoming third, that was their goal as returning home to the Spokane Arena for game 4 of their first round playoff series with the Kamloops Blazers.

The 7th-seeded Chiefs were a huge underdog in the series with the 2nd-seeded Blazers, and Kamloops showed why with 3 convincing wins on their home ice over a 4-day span.

The Blazers had won Game 1 9-0, followed by a 6-2 victory in Game 2 the following night, then put Spokane with a 5-1 victory two nights later. The Chiefs were on life support ahead of Game 4, but the club hoped the homecoming would put the club back in the win column.

Friday’s Game 4 came with the disappointing news that starting goaltender Mason Beaupit would still be down with a knee injury sustained in Game 2 at Kamloops. The club did, however, bring defender Graham Sward back on the ice, after missing Game 3 due to last-minute illness on match day. The Chiefs returned to 16-year-old goaltender Cooper Michaluk after making his first playoff start in relief of Beaupit in Game 3. Michaluk would be tested early as the Blazers would get the only two power play advantages in the first period and would outscore the Chiefs 16-6 in the first 20 minutes. Michaluk blocked 15 of those attempts, with Logan Stankoven giving the Blazers the first goal of the game on a power play count at 3:12 into the game.

Spokane would come out in the second and get a few rushes to the Blazer end, but the closest the Chiefs would come to score would be a Reed Jacobson shot that rang the post that would have tied the game at one. Michaluk once again stopped 15 Blazer shots, but once again Stankoven found the net as he scored on a rebound at 18:17 to give Kamloops a 2-0 lead going into the third. Spokane was outshot 32-11 in 2 periods, but Michaluk kept the Chiefs in the game as the club hoped to start the offense in the final period.

Stankoven would have other ideas as he beat the Chiefs defense at the blue line and went in and scored on a partial breakaway at 5:59 of the final quarter to put Kamloops in control at 3-0. Spokane’s offense outshot the Blazers 9-8 in the third, but the Chiefs had to kill 4 Kamloops power plays in the period, which limited the club’s ability to generate more offense. The Chiefs had a few powerplays, but the first lasted just 12 seconds as Spokane took back-to-back penalties to nullify that opportunity. Spokane would then squash their second chance in less than a minute with another penalty. Blazers goaltender Dylan Garand stopped 20 Spokane shots en route to his second shutout of the series as Kamloops advanced to the Western semifinals with a 3-0 victory.

The loss ended a Chiefs season that started disappointingly, saw the club struggle at the bottom of the Western Conference in late January, which would lead to the departure of head coach Adam Maglio. Assistant Ryan Smith would take over and the club would respond, playing just one game under .500 in the past two months to finish 7th in the West and make the postseason. It was a great recovery from what could have been the worst season in franchise history. Spokane was able to recover and begin to build a future that looks bright for next year and beyond.

Friday’s fourth game ended the careers of 20-year-old Bear Hughes and Nick McCarry. Hughes, who grew up watching the Chiefs grow in Post Falls, would finish as the Chiefs’ leading scorer this season with 67 points. McCarry, who was acquired from Kamloops at the trade deadline, was the club’s second-leading scorer with 63. Closing those gaps in offensive production and leadership will be a major focus for the team heading into the next year. The club also had five 19-year-olds this season, forwards Reed Jacobson, Erik Atchison and Cade Hayes, as well as defenders Mac Gross and Raegan Wiles. Spokane can only keep three next season, so at least two of those players also played their last games as Chiefs. The team has a number of upcoming 16-year-olds who should be able to make the team next season, so Spokane can only keep two 20-year-olds like they have this season.

The group of forwards next year will be led by Chase Bertholet, who was acquired from Winnipeg in the Jack Finley trade in December. Bertholet tied for the team lead with Hughes in goals with 24, and finished third with 58 points. Number one overall pick Berkly Catton represented his team well during his 15-year season and played second-row minutes in his first playoff series. Catton and Bertholet together the next 2 seasons is reason enough to be excited about the Chiefs’ future. Besides Bertholet, returning 19-year-olds include forwards Blake Swetlikoff, Ty Cheveldayoff, Grady Lane and import Yannick Proske. Defenders Graham Sward and import Timafey Kovgoreniya are the two 19-year-olds due to return. The Chiefs’ new general manager will have some interesting decisions to make on whether to bring back the two imports to Proske and Kovgoreniya, just one, or a new pair of imports for next season. The returning group of 19 will need to take the next steps in their games for Spokane to improve in the standings in a fiercely competitive U.S. Division next season.

The 18-year-old squad returns to forwards Carter Streek and Michael Cicek, who both struggled with injuries in the latter part of the season. Defenders Logan Cunningham and Brayden Crampton have both had plenty of playing time and should be ready to step into their roles next year. The 17-year-olds will include forwards Jake Gudelj and Kooper Gizowski and defender Saige Weinstein. Copper Michaluk, who was superb in net for the Chiefs in Game 4, made a strong statement to come on as a backup for starter Mason Beaupit, who will be back in net at 19 next season. Manny Panghli, who has supported Beaupit for much of this season, will struggle to maintain his role as a substitute if Michaluk proves to be just as good or better next year.

Many things can change on the list with trades starting in the year. This season, the Chiefs started with forwards Jack Finley, Luke Toporowski and Cordel Larson, all of whom were dealt before the trade deadline. Spokane will have a new general manager in place of Scott Carter, who resigned for health reasons. Whether Smith is back as head coach will depend on the new general manager, but my personal hope is that the club retains Smith. He did a tremendous job taking over from Adam Maglio and managed a last place club and took them to a tiebreaker to become the 6th place team in the West.

What excites me are this year’s draft picks who will likely be part of the club at 16 next year. Catton will definitely be a part of the club and is expected to be joined by fellow forward and second-round pick Luka Shcherbyna. Defensemen Nathan Mayes and Will McIsaac, the team’s 3rd and 4th round picks, have also seen action this year and have shown me enough that they should be part of the defensive rotation next season. It’s going to be an interesting offseason for the Chiefs, but there’s no doubt that this team is heading in the right direction with the playoff spot this year and the possibility of this young club being even younger next year is a possibility. real. Young, but talented, which means a bright future for the Chiefs heading into the 2022-23 season and beyond. It’s off-season and see you at camp at the end of August!