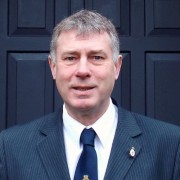 An editor has been sacked from a post on the top council after refusing to reveal his sources to his fellow authorities.

Derek Davis was removed from the coalition cabinet of Babergh District Council after his work was deemed ‘incompatible’ with his role as editor of the Shotley, Hadleigh and Felixstowe Nub News websites.

Derek, pictured, is an independent board member but was part of a Conservative-led coalition, as portfolio holder for communities, since 2018

However, he was removed from the post after he alleged council leader John Ward had been ‘pressured’ by fellow Tories who were unhappy with the content of an anonymous regular column called ‘Rowland Taylor’s Ghost’. published on the Hadleigh website.

His dismissal has since prompted three freelance colleagues to step down from their front bench roles too.

Said Derek: “Cllr John Ward told me in a phone call that the reason he got rid of me was because of pressure put on him by members of his Tory group who didn’t like my editor’s role at Nub News, especially the criticisms of our columnist, Rowland Taylor’s Ghost, towards [Conservative cabinet members] Sian Dawson and Simon Barrett, among others.

“Cllr Ward accepts that I keep both my cabinet/adviser and my working roles very separate. To that extent, I have two phones and two laptops to ensure I continue to effectively wear two different hats.

“In my role as editor of Nub News, I have always protected my sources and my columnists, and have refused to reveal to Cllr Dawson and Cllr Ward, and even others who have asked, who RTG is. I will maintain this position.

“While I thank John for giving me the opportunity to serve the people of Babergh in the two very different cabinets, it is a sad day that he has now allowed himself to be manipulated by his conservative group.”

Since 1995 Derek has worked for various regional newspapers including the Colchester Daily Gazette and the Stoke-on-Trent daily The Sentinel.

He spent nine years as football editor at the East Anglian Daily Times, then was content editor for Newsquest’s East London Guardian series from 2009 to 2013.

Derek was first elected as an independent councilor in May 2015, five years before he became regional editor of Nub News in Suffolk.

Derek’s dismissal and subsequent resignations leave five Conservatives and one Liberal Democrat in the cabinet as is.

Those who have resigned are Deputy Leader of the Council Clive Arthey, as well as Alastair McCraw and Elisabeth Malvisi.

Cllr Ward told BBC local democracy reporter Jason Noble: “My personal view is that journalists have the freedom to publish, and that is something to be cherished. Events elsewhere in Europe have shown how valuable this is.

“But my group strongly believes that journalism and cabinet membership are incompatible.

“Items published on Nub News include contributors – myself included – but some items are quite personal to certain members of the firm. Derek has a duty to publish the submitted material.

“I didn’t want to have to do that, I like him and I get on well with him.”