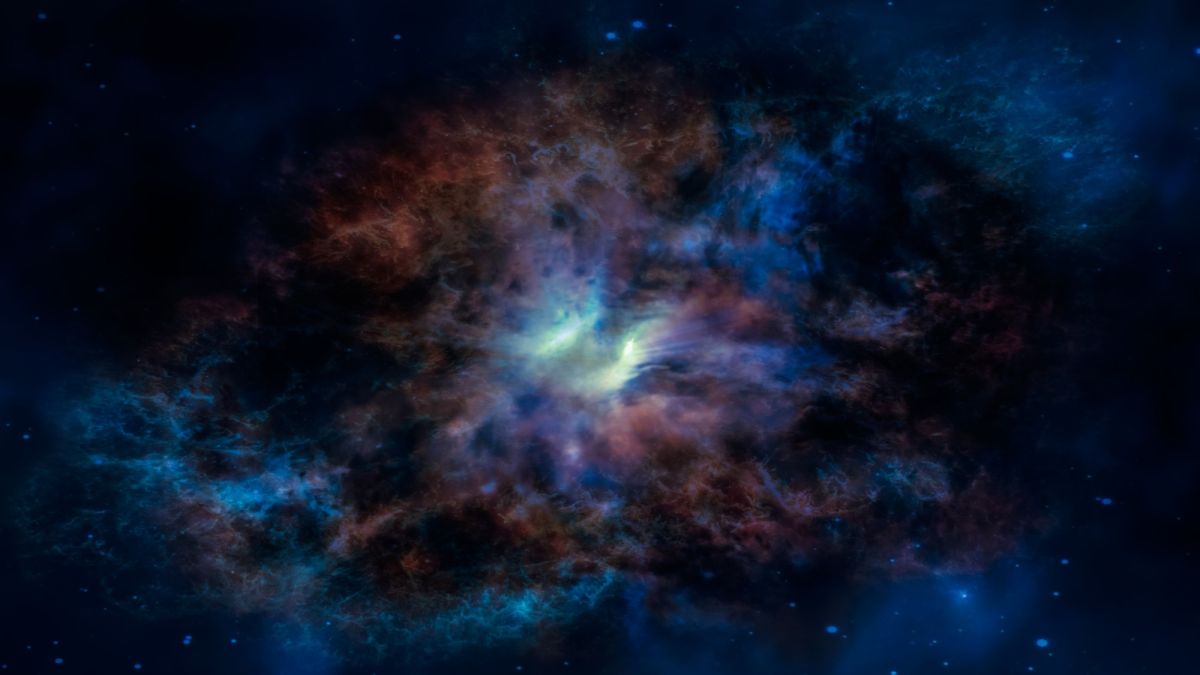 Scientists have discovered dark matter around galaxies that existed around 12 billion years ago, the first detection to date of this mysterious substance that dominates the universe.

The results, obtained through a collaboration led by researchers from Japan’s Nagoya University, suggest that black matter in the early universe is less “lumpy” than predicted by many current cosmological models. If further work confirms this theory, it could change scientists’ understanding of how galaxies evolve and suggest that the fundamental rules governing the cosmos might have been different when the 13.7 billion-year-old star universe was only 1.7 billion years old.

The key to mapping dark matter in the very beginning of the universe cosmic microwave background (CMB), a sort of residual Big Bang background radiation that is distributed throughout the cosmos.

“Looking at dark matter around distant galaxies? It was a crazy idea. No one realized we could do that,” said Masami Ouchi, a professor at the University of Tokyo. said in a press release. “But after giving a lecture on a large sample of distant galaxies, Hironao came to me and said that it might be possible to observe dark matter around these galaxies with the CMB.”

Because light takes a finite time to travel from distant objects to Earth, astronomers see other galaxies as they existed when the observed light left them. The further away a galaxy is, the more light has traveled to us and therefore the further we see them in time, so we see the most distant galaxies as they were billions of years ago, in the nascent universe.

The observation of dark matter is even more difficult. Dark matter is the mysterious substance that makes up about 85% of the total mass of the universe. It doesn’t interact with matter and light like the everyday matter of protons and neutrons that fills stars, planets, and us.

To “see” dark matter, astronomers must rely on its interaction with gravity.

According Einstein’s theory of relativity, objects of enormous mass cause the curvature of spacetime. A common analogy is an expandable rubber sheet containing balls of increasing mass. The larger the mass, the greater the “bump” it causes in the sheet. Similarly, the larger the cosmic object, the more extreme the distortion of space-time it causes.

Massive objects like galaxies cause spacetime to bend so strongly that light from sources behind a galaxy is bent, much like the trajectory of a marble rolled on the stretched rubber sheet would bend. This effect shifts the position of the light source in the sky, a phenomenon called gravitational lensing.

Study the distribution of dark matter in a galaxy, astronomers can observe how light from a source behind this galaxy changes as it passes in front of the “lens galaxy”. The more dark matter a lens galaxy contains, the greater the distortion of light passing through it.

But the technique has limits.

Because the oldest and most distant galaxies are very faint, as astronomers look deeper into the universe and further back in time, lensing becomes more subtle and difficult to see, and scientists need both many background sources and many ancient galaxies for point-lensing by dark matter. This problem has limited the mapping of dark matter distribution to galaxies around 8–10 billion years old.

But the CMB provides a source of light older than any galaxy. CMB is ubiquitous radiation that was created when the universe cooled enough to allow atoms to form, reducing the number of free electrons scattering photons in a moment that cosmologists call “the last scatter”. The reduction of free electrons allowed photons traveling freely, meaning the universe suddenly ceased to be opaque and became transparent to light.

And just like light from other distant sources, the CMB can be distorted by galaxies containing dark matter due to gravitational lensing.

“Most researchers use source galaxies to measure the distribution of dark matter from the present to 8 billion years ago,” Yuichi Harikane, an assistant professor at the University of Tokyo, said in the release. . “However, we could go further back in time because we used the most distant CMB to measure dark matter.”

The team combined lensing distortions from a large sample of ancient galaxies with those from the CMB to detect dark matter dating back to when the universe was just 1.7 billion years old. And this ancient dark matter paints a very different cosmic picture.

“For the first time, we were measuring dark matter from almost the earliest moments of the universe,” Harikane said. “Twelve billion years ago things were very different. You see more galaxies being formed than today; the first clusters of galaxies are also starting to form.”

These clusters can be composed of 100 to 1,000 galaxies bound to large amounts of dark matter by gravity.

Is dark matter clumped together?

One of the most significant aspects of the team’s findings is the possibility that dark matter is less clumped together in the early universe than many current models suggest.

For example, the widely accepted Lambda-CDM model suggests that tiny fluctuations in the CMB should have driven gravity creating pockets of dense matter. These fluctuations eventually lead matter to collapse to form galaxies, stars, and planets, and should also lead to the formation of dense pockets of dark matter.

“Our discovery is still uncertain,” Harikane said. “But if true, that would suggest that the whole model is flawed as you go back in time. That’s exciting because if the result holds after reducing uncertainties, that might suggest an improvement in the model that could provide insight into the nature of dark matter itself.”

The team will continue to collect data to assess whether the Lambda-CDM model is consistent with observations of dark matter in the early universe or whether the assumptions underlying the model need to be revised.

The data used by the team to reach its conclusions comes from the Subaru Hyper Suprime-Cam Survey, which analyzes data from a telescope in Hawai’i. But the researchers have only used a third of that data so far, meaning a better distribution map of dark matter may become available as the rest of the observations are integrated.

The team is also eagerly awaiting data from the Vera C. Rubin Observatory‘s Legacy Survey of Space and Time (LSST) that could allow researchers to look at dark matter even further back in time.

“LSST will allow us to observe half the sky,” Harikane said. “I see no reason why we couldn’t see the distribution of dark matter 13 billion years ago next.”

The team’s research was published August 1 in the journal Physical examination letters.

Here’s what to know beyond why Merck & Co., Inc. (MRK) is a trending stock