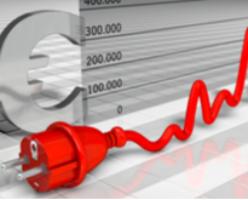 Annual energy inflation in the EU reached 27% in January 2022, continuing its upward trend. This information comes from data recently published by Eurostat.

After its lowest rate for five years in May 2020 (-11%), energy inflation started to increase but continued to show negative rates until February 2021, varying between -9% and -1%. From March 2021, energy inflation is positive and increases almost continuously, reaching 26% in November 2021 and 27% in January 2022.

The energy inflation rate is the highest since the Harmonized Index of Consumer Prices (HICP) was first published in 1997. In October 2021, it exceeded the highest point recorded so far : 17% in July 2008.

As for the energy sub-components, gas peaked in January 2022 at almost 41%, an increase of 13.5 percentage points (pp) from the previous month, significantly down above other energy sources – fuel (including gasoline, diesel, liquid fuels and other fuels) at +26% (-2.8 pp) and electricity at +24% (+3.1 pp).