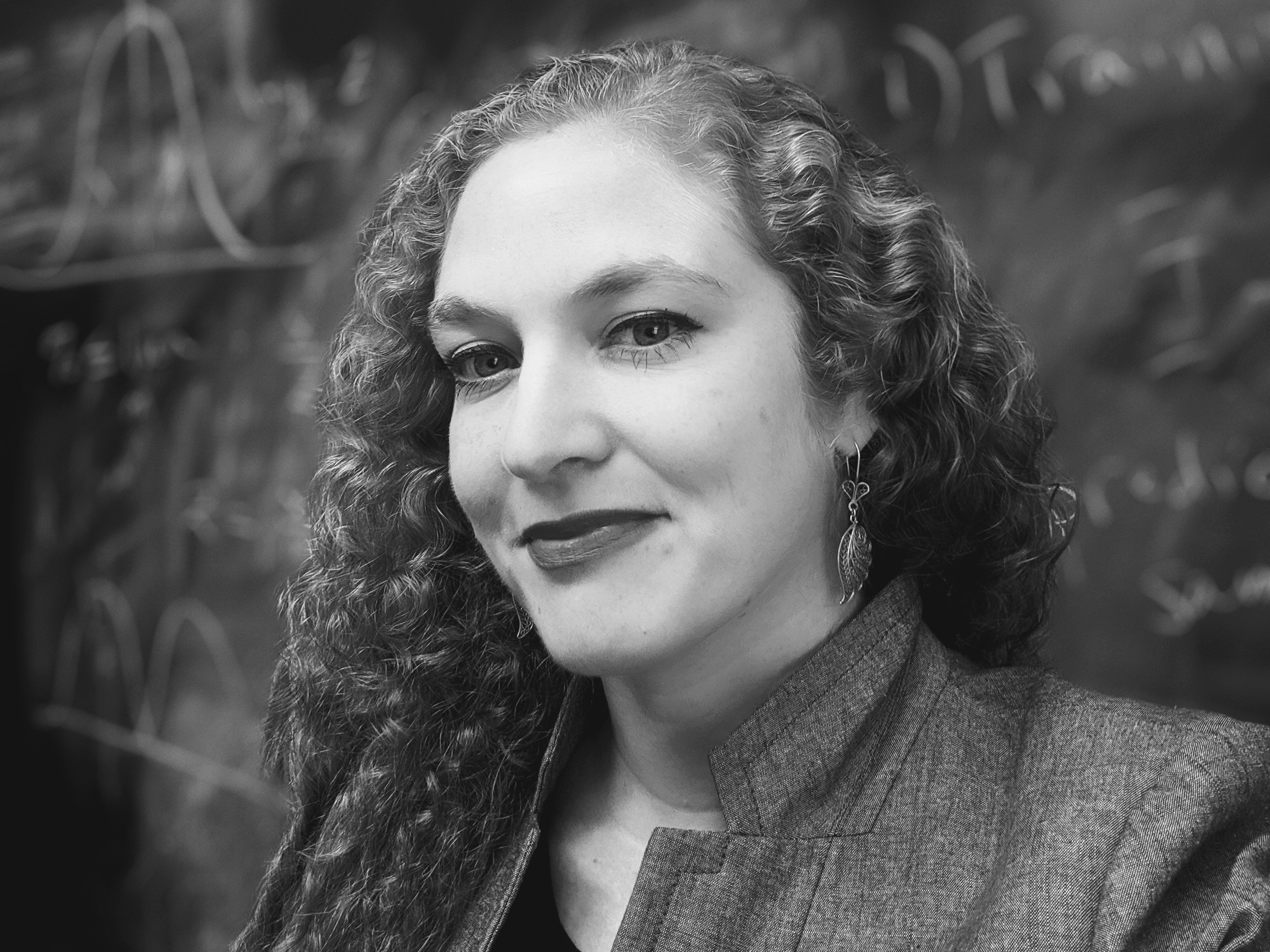 Faye McNeill fights air pollution, from the molecular to the global scale

Faye McNeill fights air pollution, from the molecular to the global scale

This story is part of a series celebrating the work of women at Columbia Climate School, in honor of International Women’s Day on March 8, 2022. Learn more about the day and our related blog posts here.

At 16, V. Faye McNeill, now a professor and atmospheric chemist at Columbia University, decided to combine her love for chemistry and math in her studies after high school. She opted for a BS in Chemical Engineering from Caltech, which she graduated in 1999.

This foundation directed his career towards exploring the intricacies of chemically reacting systems at multiple scales. “That mindset has served me well as an atmospheric chemist,” she said. Chemical engineering allowed the budding scientist to understand the chemical and physical processes that influence aerosols (particles or droplets suspended in the atmosphere) and cloud formation.

In 2000, McNeill received the prestigious Earth System Science Fellowship from NASA which funded his PhD. research project at MIT. At the time, she and her Nobel Prize-winning Ph.D. adviser, Mario Molina, were analyzing reactions between gases and ice particles in the clouds above the South Pole to determine how the Antarctic ozone hole was formed.

“It was clear that these rapid reactions were key to understanding the hole in the ozone layer,” McNeill said. “But it challenged our previous understanding of the chemistry of ice surfaces. We were following up and working out the details with this story.

To this day, she continues to draw inspiration from the late Molina, who predicted and later proved how chlorofluorocarbons (CFCs) were eating away at Earth’s ozone layer above Antarctica. Molina not only worked to ban CFCs, but also led efforts to improve air quality in Mexico, Asia, and the United States. McNeill is determined to continue his legacy by working to improve air quality by collaborating with researchers in the Global South.

Seven years after joining Columbia University as an assistant professor in 2007, McNeill became the first woman to earn a position in the chemical engineering department.

With more than two decades of experience in the field of atmospheric chemistry, she continues to conduct research on the impact of emissions from human activities on air quality.

Emissions from power plants, oil refineries, agriculture, industrial facilities and other human activities are a major source of air pollution. But in many cases, the pollutants emitted undergo complex chemical and physical transformations in the atmosphere to produce the toxic cocktail of smog that affects human health, McNeill explained. “We are uncovering new mechanisms by which pollution precursors can be transformed to create haze during their lifetime in the atmosphere,” she said.

In a lab, scientists can uncover dramatic effects, but figuring out how that might happen in the environment is a whole other ball game, McNeill added. “The need to link findings from the lab, which occur one molecule at a time, with air quality on a regional or global scale makes a modeling approach crucial.”

Over the years, McNeill and his team have developed their own numerical model of atmospheric interactions. This allowed them to continue to decode whether or not their lab’s molecular-level discoveries might have an environmental impact.

“Large-scale models of atmospheric chemistry and climate are computationally heavy because they include many different variables,” she said. “Within an atmospheric particle, tens of thousands of chemical reactions take place simultaneously. It is not possible to map all this chemical complexity, because it would then take a year to run a one-day simulation.

It aims to reduce this overwhelming volume of complexities by prioritizing the physical processes that need to be included in the large-scale model. This will further improve the accuracy of atmospheric models and allow researchers to make more accurate predictions.

“These models will help determine which policies will be most effective in addressing climate change and air quality issues,” McNeill said.

Being a mother of two children with asthma motivated McNeill to mobilize her cutting-edge research at Columbia for action on the ground. In 2019, she and a large group of colleagues launched the Clean Air Toolbox for Cities. The initiative is an effort to identify and address the causes of urban air pollution in the Global South, focusing so far on India, sub-Saharan Africa and Indonesia. Given that the lack of air quality data in these places hard hit by air pollution is holding back progress towards action on air quality, one of the main objectives of the initiative is to scale up air quality data collection in low-income countries with limited resources. McNeill and his colleague, Daniel Westervelt, who co-leads the Clean Air Toolbox, used low-cost air sensors to fill in the data gaps.

One of the focal points of the initiative is Kolkata, a city in the Indian state of West Bengal. Over the years, McNeill has forged close ties with the city. Her husband’s family is from Kolkata, and hearing him speak daily at home with their children, as well as their frequent trips to town, has helped her learn Bengali, the local language of the region. “I love the city, and because I had already made connections with a network of local atmospheric scientists, it was easy to get started there,” McNeill said.

For the past three years, McNeill has partnered with and supported local experts who have worked on air pollution issues. She, along with other Clean Air Toolbox researchers, is helping a local startup, Ideation Technologies Solutions, analyze the vast amounts of data compiled from a network of air sensors they have set up across Kolkata. . They are also helping to expand air pollution monitoring beyond what is already done by local groups such as the West Bengal Pollution Control Board (WBPCB).

“The WBPCB is faced with the enormous challenge and responsibility of cleaning the air in Kolkata,” McNeill said. “They are looking for expert help and support. They’ve been an incredible partner through it all.

The WBPCB uses government-grade air quality monitors, which can be quite expensive. In order to get more information about air pollution at the neighborhood level, low-cost sensors have been essential, because McNeill and his partners can deploy more of them and cover a larger area.

But this project encountered several difficulties. In May 2020, when Cyclone Amphan wreaked havoc in West Bengal, the team’s data collection was halted. The COVID-19 pandemic also made it impossible to travel to Kolkata for two years. Thanks to McNeill’s strong network of partners in the city, they were able to continue the work remotely.

Currently, the Clean Air Tool Box has implemented additional air sensors in Kolkata on a pilot basis. McNeill and his team are also part of a large USAID-funded project – Clean Air Catalyst – in Indore, a city in central India. In the future, McNeill and his colleagues plan to expand their air pollution research to other Indian cities.

“Everyone breathes air. Thus, this form of pollution decreases the life expectancy of everyone. As countries like India continue to develop rapidly, air pollution needs to be addressed urgently,” she added. “Rather than doing what the United States has done, which is to pollute first and then go back, it would be better to develop in a sustainable way. In this way, such public health problems could be avoided. in the first place. “

Although she works in the emotionally taxing field of climate science, the aerosol scientist has channeled her worries about the COVID-19 pandemic and air pollution crises into productivity.

Since the start of the pandemic, McNeill and his research group have collaborated with Columbia Facilities to perform measurements to characterize the ventilation of indoor spaces at Columbia University’s Morningside Heights and Medical Center campuses.

They compiled data on how ventilation takes place in a range of different buildings, including those built in 1894 and after the 1960s. The aim of the study was to understand what steps needed to be taken to prevent transmission of the coronavirus indoors, and they have identified a few places on campus where additional air filtration systems should be installed. McNeill then brought together a group of researchers who had conducted similar studies at other schools and universities across the United States to compare their results and recommend best practices for those who wanted to collect ventilation data and use it to support the decision making.

“We all felt better once we started with this,” she said. “When you’re dealing with multiple crises, you can either look aside and feel paralyzed, or you can go out and try to do something to help.”

You quit your job, but you still need a retirement plan