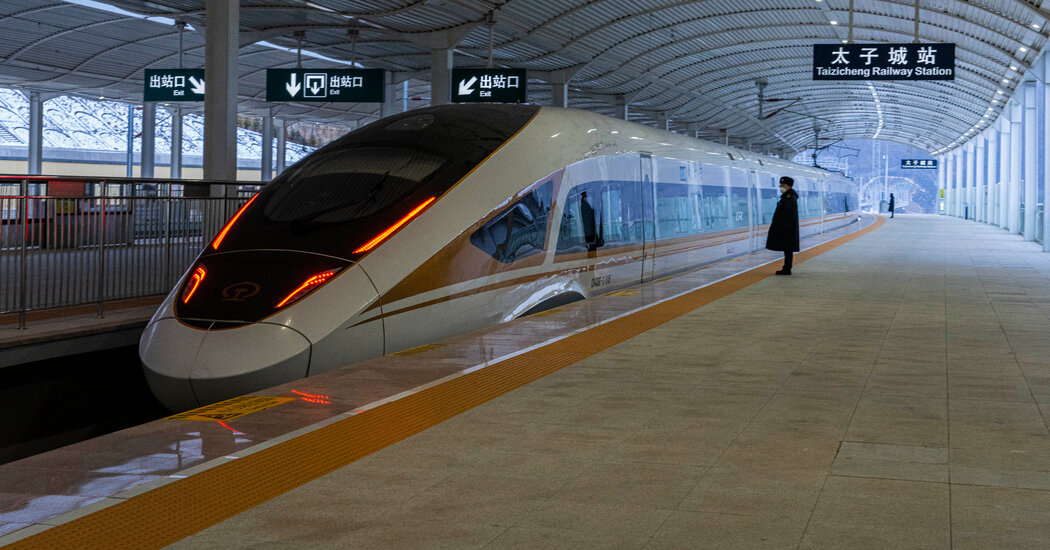 Hosting the Olympics is expensive. For China, it is worth every billion.

ZHANGJIAKOU, China — To perform an Olympic ski jump, China lined a steel slope and covered it with artificial snow. To build a high-speed rail line connecting the sites and Beijing, engineers dug tunnels through the surrounding mountains. And to keep the coronavirus at bay, workers perform tens of thousands of PCR tests on Games participants every day.

Hosting the Winter Olympics costs China billions of dollars, a scale of expense that has made the event less attractive to many cities around the world in recent years. More and more of them concluded that the Games were not worth ending up with a hefty bill, white elephant stadiums and less tourism benefits than they had hoped.

But China views the Games with a different calculus. Beijing has long relied on heavy investment in building railways, highways and other infrastructure to provide millions of jobs for its citizens and reduce transportation costs. With the 2022 Games, he also hopes to spark continued interest in skiing, curling, ice hockey and other winter sports that could increase consumer spending, especially in the cold northeast and economic difficulty of the country.

Perhaps most importantly for Chinese leader Xi Jinping, the Olympics are a chance to demonstrate to the world his country’s unity and confidence under his leadership.

“For the international image, prestige and face of China, as the Chinese would say, nothing is too expensive,” said Jean-Pierre Cabestan, a political scientist at Hong Kong Baptist University.

Yet with China’s economy already slowing and the outlook for global growth dimming, along with fears that the Omicron variant of the coronavirus could lead to more shutdowns and suffocation of global supply chains, Beijing s is wary of soaring costs. Even Mr. Xi acknowledged that the event needed to be streamlined, saying last year that the aim was to hold a “simple, safe and splendid” event.

Virtually every Olympics in recent years has sparked disputes over cost overruns. A study by the University of Oxford found that the running costs of the Olympic Games held since 1960 have on average nearly three times what the host cities originally proposed.

The city of Sochi in Russia, which hosted the Winter Olympics in 2014, has spent and invested more than $50 billion, half of it in infrastructure. When Beijing hosted the Summer Olympics in 2008, it said it spent $6.8 billion, but that didn’t include the extra tens of billions it used to build roads, stadiums, metro lines and an airport terminal.

This time, China has set a budget of around $3 billion, a figure that includes construction of competition venues but not projects like a $1 billion high-speed rail line and a $5 billion highway. of dollars.

China’s concerns over the pandemic have dashed hopes the Games would attract tourists. Organizers said last fall that they would not sell tickets to overseas spectators. Then they announced last month that most Chinese residents could not go there either, prompting hotel managers in Beijing to rush at the last minute to drastically reduce the high room rates they had set for February.

Despite these difficulties, the Chinese authorities insisted that they had remained within the limits of the operating budget.

Officials said the lack of spectators meant fewer staff were needed at the Games. China also saved money by canceling a welcome ceremony for foreign visitors and shortening the torch relay to just three days, the Beijing organizing committee said in an email response to questions. . Beijing was also able to reuse competition venues, a giant media center and other facilities built for the 2008 Summer Olympics.

At $3.1 billion, China’s operating budget is comparable to the inflation-adjusted average cost of hosting previous Winter Olympics, according to researchers at the University of Oxford.

“Judging by the cost of previous Winter Olympics, this should be enough to cover the cost, especially considering that many facilities have already been built,” said one of the experts, Bent Flyvbjergprofessor of major program management at Oxford.

But it’s difficult to assess what part of coronavirus prevention costs, if any, are included in the budget, Flyvbjerg said. Chinese accounting is often opaque and there are many budgets in which health spending can be accounted for, he said.

The government has also urged businesses to shoulder a greater share of the costs of hosting the Games. Other host cities of previous Olympics have spent a lot of money building housing for athletes and journalists and a media center. China has taken a different approach.

In Zhangjiakou, an area near Beijing where some competitions take place, Chinese authorities have temporarily taken control of the Malaysian ski resort Genting Secret Garden. The resort has expanded its capacity to 3,800 guest rooms and vacation apartments, up from 380 before China won its Olympic bid. Lim Chee Wah, the station’s founder and co-owner, said in an interview that he was not told how much the government would compensate him for using the station for most of the winter season, but that he trusted her. would be right.

“We said, okay, thank you, but we will negotiate how to make the compensation – that will be done later,” he said.

China also does not count the long-term infrastructure investments made in the years leading up to the Games.

The national government has spent $2 billion to build a highway linking northwest Beijing with Yanqing, where Olympic sliding and alpine skiing events are held, and another $3.6 billion to extend the highway to ‘to the Taizicheng Valley, where the ski resorts are.

Before Beijing won its bid to host the 2022 Olympics, the government started spend $8.4 billion on a high-speed rail line that carries travelers from Beijing to Inner Mongolia at speeds of up to 217 miles per hour. After winning the Olympics, Beijing added $1 billion to this project to build an additional segment that branches off from the main line and climbs up the mountains to Taizicheng.

Resort owners like Mr Lim of Genting hope the new infrastructure will help grow the industry. Expanding the station 10 times ahead of the Olympics, he said, he was told to expect the national rail service to run 15 or 20 trains a day to the Taizicheng Valley.

In an email response to questions, China’s national railway said it was running 15 bullet trains a day in each direction when the line opened in late 2019. But the schedule has been significantly reduced. reduced a month later when the pandemic began, to five trains on most days and an additional five days on peak days.

China sees the Olympics as transforming Beijing, which receives only a foot of natural snowfall most winters, into a global winter sports destination.

Liu Yi and Li you contributed to the research.

Radisson Hotel Group makes its debut in Madagascar with the opening