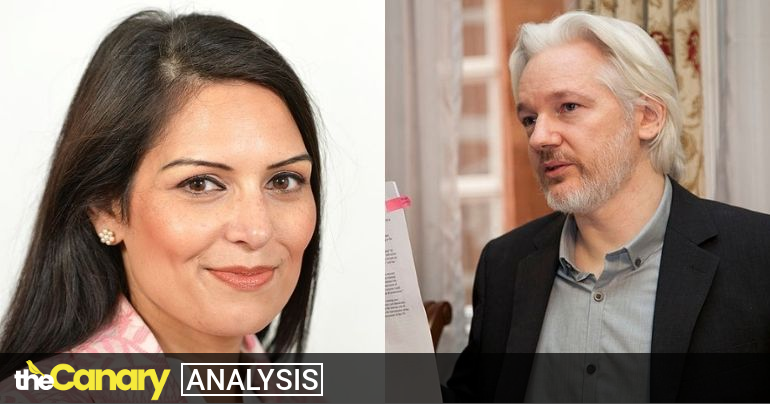 UK Home Secretary Priti Patel is expected to decide any day now whether WikiLeaks Founder Julian Assange is set to be extradited to the US to face espionage charges. But legal sources now say monitoring Assange’s lawyers could see the extradition case thrown out.

In the meantime, the European Court of Human Rights has ruled that the British government illegally spied on one of Assange’s lawyers.

The Canary previously listed a number of defense issues that could be raised in court. These include the Spanish company UC Global’s surveillance lawyers for Assange at the Ecuadorian Embassy in London.

The Canary reported that meetings between Assange and some of his lawyers – including Melinda Taylor, Jennifer Robinson and Baltasar Garzón – were being monitored. Surveillance also included the recording of visitors such as Gareth Peirce – another lawyer for Assange – as well as a seven-hour session between Assange and his legal team on June 19, 2016.

In this regard, WikiLeaks editor Kristinn Hrafnsson commented:

The case should be thrown out immediately. Not only is it illegal on its face [extradition] treaty, the United States carried out illegal operations against Assange and his lawyers, who are the subject of a major investigation in Spain.

Evidence was presented in a Spanish court during the trial of UC Global CEO David Morales that the surveillance collected by UC Global was provided to a contact with ties to US intelligence.

The Canary also reported that during the extradition proceedings in London, the defense referred to “Witness No. 2,” a whistleblower who worked for UC Global. And according to anti-shade, Witness #2 revealed that:

data was collected and uploaded daily to a remote server. This information was accessed by US intelligence services. Original recordings, including sound, were collected from multiple microphones every 14 days.

The Council of Bars and Law Societies of Europe, which represents over a million lawyers, has sent a letter to UK Home Secretary Priti Patel. The Council points out that the surveillance of Assange and his visitors amounted to a serious breach of client-attorney confidentiality, along with other concerns:

Letter from the Council of Bars and Law Societies of Europe (CCBE) to the UK authorities regarding the interception of communications between Julian Assange and his lawyers @wikileaks @DefendAssange @AssangeLegal pic.twitter.com/hljFK7gW8J

Indeed, English law on solicitor-client confidentiality is clear, as this judgment 2018 in the court of appeal.

Now the legal sources have Told El País that the surveillance undertaken by UC Global could lead to the cancellation of the extradition against Assange. The newspaper reports that:

Proving that US intelligence knew about Assange’s defense strategy by spying on his lawyers could nullify the extradition by calling into question the illegal methods used by the US to bring Assange to trial there, according to judicial sources .

One could argue that the [extradition] the proceedings were flawed because the right of defense was violated by the country requesting the extradition.

The Spanish judge requested in 2020 the possibility of questioning Assange by videoconference, but the British authorities did not cooperate. Indeed, it is claims that these authorities have actively blocked this request.

Meanwhile, the UK government has admitted responsibility for the unlawful surveillance carried out on Assange’s lawyer, Jennifer Robinson:

The decision of the European Court of Human Rights in the Robinson case could provide an additional argument for the extradition case against Assange to be quashed.

On June 7, the Organization for Security and Cooperation in Europe (OSCE) published a press release regarding Assange. He cited the OSCE Media Freedom Representative Therese Ribeiro, saying:

I call on UK Home Secretary Priti Patel not to extradite Julian Assange. The public interest of many of WikiLeaks’ publications must be considered, as they have contributed to important investigative reports and news stories. It is essential to consider the impact on freedom of expression and freedom of the media if he is extradited and sentenced. The fact that someone who discloses public interest information risks a long prison sentence could have a serious and lasting stifling effect on investigative journalism.

Last May, the Council of Europe’s Commissioner for Human Rights, Dunja Mijatović demand Patel not to extradite Assange. In a letter to Patel, Mijatović declared:

I am of the view that the United States indictment against Mr. Assange raises important questions about the protection of those who publish classified information in the public interest, including information that exposes human rights violations of man.

A bill introduced by Patel, if passed, could criminalize the kind of activities Mijatović refers to in his letter. This bill would make it difficult, if not impossible, for a WikiLeaks type of organization to publish material considered by the British authorities to be “beneficial” to foreign powers.

Pressure is mounting in Australia

Meanwhile, in Australia, pressure is mounting on new Labor Prime Minister Anthony Albanese to law on previous statements that Assange should be freed. For example, in December 2021 Albanian declared:

I have been saying for some time that enough is enough… He has already paid a heavy price for the publication of this information and I do not see the point of the ongoing prosecution of Mr. Assange.

In an interview about Australia 60 minutes program, Independent MP Andrew Wilkie explain why he supports Assange:

it’s about an Australian journalist who publishes hard evidence of American war crimes, the United States deeply embarrassed and out for revenge, and the Australian government happy to accompany the trip because it believes its relationship with Washington is more important than the welfare of Australian citizens and the fundamental right of Australian citizens to justice.

MP Julian Hill@JulianHillMP
I hope that one of the first acts of our new Cabinet will be to speak on behalf of our fellow citizen and demand that the US government drop the shameful charges against Julian Assange. Loud and loud, no weasel words. #auspol #FreeAssange

The continued prosecution of Mr Assange is an affront to the vast majority of Australians. Australians clearly want a government that will defend the freedom of journalists, whistleblowers and the human rights of all Australians like Mr. Assange.

The former government’s assertion that Australia is not a party to its extradition is no longer an acceptable excuse for inaction. We are convinced that the new government understands all the concerns we raise. Whether it’s the legal precedent set by the extradition or the extreme time Julian spent in maximum security without conviction, we hope for prompt action soon.

According to Assange Defense, Assange’s lawyers have submitted an application at:

appeal the extradition order again to the High Court, this time on the other substantive issues of the magistrates’ original decision which had not been discussed on the previous appeal. These issues include a politicized prosecution, the threat the charges pose to the First Amendment, and the likelihood that Assange will receive a fair trial in the Eastern District of Virginia.

With the interventions of Ribeiro and Mijatović, and the Council of Bars and Law Societies of Europe, the pressure on Patel to release Assange is increasing. And in Australia, Prime Minister Albanese should now prove his integrity and add his intervention as well. And if all else fails, Assange’s lawyers can always consider take the case to the European Court of Human Rights.

In the meantime, even if Patel recommends that the extradition proceed, the decisions in the extradition case could be overturned based on the latest evidence from the Spanish courts.