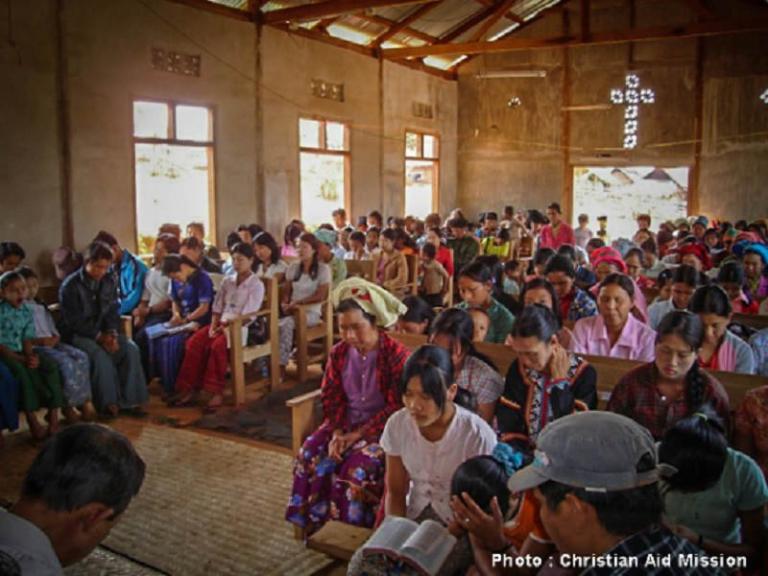 Myanmar: Christians, pray for our brothers and sisters

WILLS POINT, TX – KP Yohannan, founder of Gospel for Asia (GFA World), whose heart to love and help the poor has inspired many charities like Gospel for Asia Canada and Metropolitan of Believers Eastern Church, to help the poor and needy around the world – sound the alarm bells to pray for Christians in Myanmar as they face intense danger and persecution from the military.

Luke recorded Peter’s miraculous deliverance from prison after “constant prayer was offered to God for him by the church” (Acts 12: 5). Today our Church brothers and sisters in Myanmar are caught up in a bloody civil war and they need our help. They are persecuted, killed and literally dependent on our prayers for their deliverance. There is only one Church – the body of believers in Christ throughout the world. When a part of the body is attacked, it is up to us to pray for their deliverance.

On September 18, the Burmese army used heavy artillery fire against its own people in a large town called Thantlang. They burned down houses, including those of Chin Christians. Because firefighters are too afraid of the military to put out fires, people are taking it in hand. When a pastor tried to enter a burning building to save people, he was shot in the street. Others who tried to help were hunted down and shot.


Young people have no opportunity to go to school or work in Myanmar. Their future is that of a forced decision between two choices: becoming a member of the army or joining forces with the army fighting the army.

I followed the situation in Thantlang. Half of the city’s population has now fled gunfire and bombardment. The Christians there are in dire straits. Residents of 10 Christian churches with 1,000 believers were forced to make a terrible decision: stay and be persecuted or flee and face an uncertain future living in the jungle, trying to make a grueling trip over the mountains and across the border. Today, there are only six families left in these churches. The others fled.

Those who flee head for the densely forested mountains along the Indian border. The people of the Indian state of Mizoram speak the same language and have the same culture as Myanmar. Refugees who succeed are allowed to live in refugee camps. But crossing the river border is almost impossible.


We’ve all seen the heartbreaking videos of people crossing borders in the West. In Myanmar, the situation is dire. People who have fled their jobs, homes and schools, roam the mountains living in makeshift tents, trying to survive in the wild. The river is turbulent, swelling in the rainy season, so people who manage to tie a few planks to cross are often swept away by the rapid current.

Communication between friends and family is non-existent. People don’t have cell phones and try to get word of mouth. Many people fall prey to men who turn out to be human traffickers. The traffickers make big promises and earn a lot of money for “safe passage” only to sell the young women of the family to other countries as sex slaves.

In the book of Lamentations, Jeremiah describes the distress of captive Jerusalem thus: “When her people fell into the hands of the enemy, without anyone to help them, the adversaries saw her and mocked her fall… I called my lovers. , but they cheated on me. My priests and elders breathed their last in the city as they sought food to restore their lives ”(Lamentations 1: 7, 19, KJV).


We must be careful not to get so carried away by the woes of the pandemic that we do not care about the suffering of others. Jeremiah – the “weeping prophet” – cried out, “Is it nothing to you, all of you who are passing by? (Lamentations 1:12, NKJV).

Pray first for the Church of Myanmar, for pastors, priests, missionaries and their families. I know many Christian leaders who are still there, still standing, and many pastors and priests who are always trying to meet the needs of others. But what do you do when your people are attacked or dispersed?

It is a spiritual battle that can only be won through prayer and fasting. The question is, do we have fire in our bones? Do we understand our vital role of intercession in this theater of terror? Or is Myanmar just another crisis in the news that we can ignore by heading to Starbucks?

Pray for the nation of Myanmar. Pray for the believers who fled and those who are still standing. Pray for those who stand up as witnesses of Christ. Pray for political leaders to stop the killings and persecution. Finally, let us pray that “the men who turned the world upside down” will rise up and bring peace to this beautiful and troubled land.

Pray for Myanmar: a war-torn nation in need of God’s light – Since 2011, hundreds of thousands of people have been displaced by violence. Meanwhile, citizens are still recovering from the devastating effects of Cyclone Nargis of 2008, which destroyed livelihoods and killed 140,000 people, as well as more recent storms. As Myanmar struggles to rebuild and find peace, pray with us that the mighty hand of the Lord will bring healing and hope.

KP Yohannan, founder and director of GFA World (Gospel for Asia) and Metropolitan of Believers Eastern Church (BEC), has written over 250 books, including Revolution in world missions, an international bestseller with over 4 million copies printed. He and his wife, Gisela, have two grown children, Daniel and Sarah, both of whom serve the Lord with their families.

GFA World (www.gfa.org) is a faith-based global mission agency, helping national workers bring life-saving assistance and spiritual hope to millions of people around the world, especially in Asia and Africa , and sharing the love of God. In GFA World’s latest annual report, this included thousands of community development projects that benefit oppressed families and their children, free medical camps held in over 1,200 villages and isolated communities, over 4,800 water wells. drinking water drilled, over 12,000 water filters installed, income – generating Christmas gifts for over 260,000 needy families, and education offering hope and encouragement available in 110 languages ​​in 14 countries through the Ministry of radio. GFA World has started programs in Africa, starting with compassionate projects in Rwanda. For all the latest news, visit our newsroom at https://gfanews.org/news.

Read more about Gospel for Asia in the video “A year in review with KP Yohannan.”

Stay encouraged and get your regular dose of challenge through other articles on Patheos by KP Yohannan Metropolitan, or on his blog at kpyohannan.org.

You can read more about KP Yohannan Metropolitan in click here.