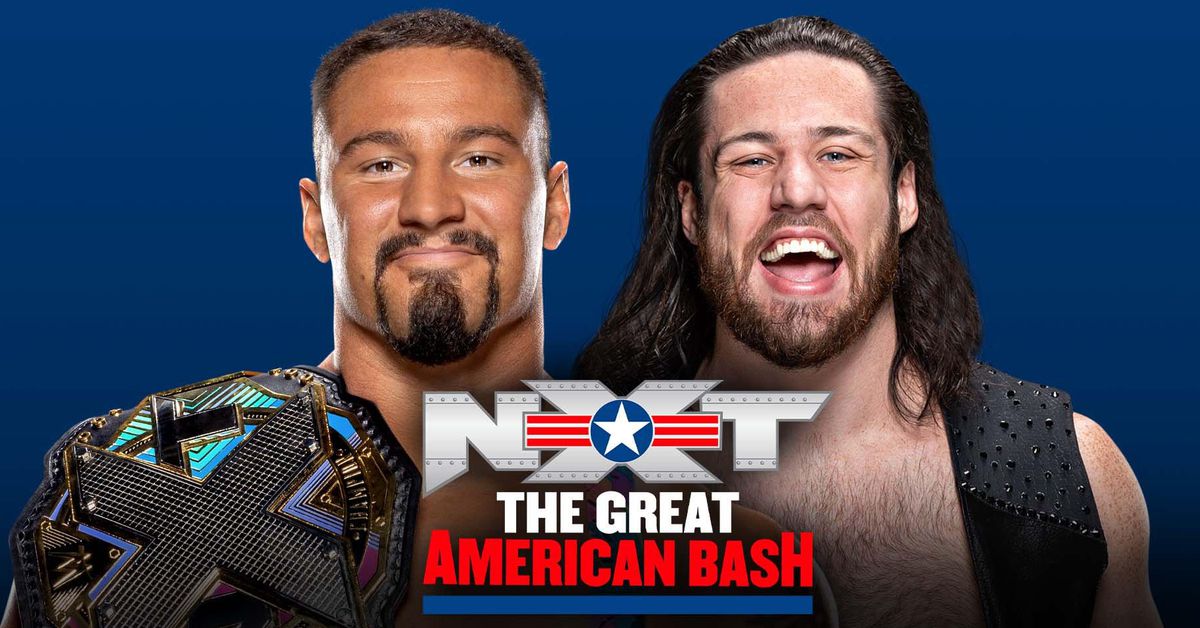 Here’s a place to check results and comment with the latest episode of WWE NXT, airing live Tuesday nights at 8:00 p.m. Eastern on USA Network.

Discover our Tuesday Morning Preview Article to keep up to date with what happened and what we expect this week.

Announced for tonight by the WWE Performance Center: Bron Breakker defends his NXT Championship against Cameron Grimes, the North American title is on the line when Grayson Waller challenges Carmelo Hayes, and The Creeds & Toxic Attraction put on their Tag Belts when they take on Roderick Strong & Damon Kemp and Cora Jade & Roxanne Perez! Plus, Wendy Choo and Tiffany Stratton try to work out their issues, Wes Lee takes on Trick Williams…and more!

Come back here at 8 p.m. ET when the NXT the live blog starts once the show starts in the US. A running record of everything happening will be below this line here.

Capital C normality now, your basic human needs order the pollution of your life under Capital C. This message is brought to you by the abuser, they don’t care about you like we do, that’s why we provide, and that’s why I’m going to liveblog this wrestling show right here for you guys.

The show opens with a video package of the list talking about tonight’s show at a pool party.

Jade and Jayne to start, collar and elbow, thrashing around the ring, dodging strikes, sliding under, upkick, uppercut, Cora firing, basement dropkick, cover for two! Dolin scores, vicious knees and kicks, Perez scores and Jacy gets a cheap shot to put the toxics under control as we go down.

Back from commercial, Jade is still in bad shape while the toxics harass her. Upkick connects, forearms at once, boots at once, and Cora and Jacy are both down! Back and forth, Mandy Rose running interference, referee Darryl Sharma ejecting her and Cora tagging Roxanne!

Gigi back, off the ropes, big lariat, no dice! Perez enters in there…

We see footage of Bron Breakker entering the arena earlier, and he claims his shoulder is fine.

Tony D’Angelo speaks most of Legado del Fantasma. He says he took care of Santos Escobar and shows us pictures of Escobar in what appears to be a coffin or maybe a hospital bed, and says no one is making fun of Tony D. He says that Elektra Lopez is the only one who worked, and next week he’ll give Wilde and Del Toro one last chance to prove themselves next week.

Wes Lee enters to send us to the break.

Back from the commercial, we get a promo from Pretty Deadly about how Essex is the fashion capital of the world and how much they hate Briggs & Jensen.

Williams is overwhelmed early and goes to his corner for a timeout with Carmelo Hayes as the cornerman. By throwing wild kicks, dodging and dodging, Lee’s flying scissors prepare a dropkick! Kick combos take the big man down and Wes sends him to the ground!

Came out for another breath, spilling some sort of liquid on his hands and going back inside, smashing his wet fists into Lee’s face to set him in place…

Backstage, we see Tiffany Strattong putting on makeup, but Wendy Choo rolls in just as she’s about to get her last little coat of finishing powder and covers it with a huge handful of powder to send us breaking.

Back from the commercial, match joined in progress and Choo pulls Stratton’s hair off the apron but gets his hand slammed into the post! Back inside, facebuster, hand smash, land chops, double stomp on a roll-through, cover for two!

Back and forth, Tiffany focuses on the hand, ripping Wendy’s fingernails, sleepytime crossbody, no cover, shotgun dropkick…

Tiffany Stratton wins by pinfall with the Vader Bomb corkscrew.

Cora Jade and Roxanne Perez are interviewed about winning the tag titles.

Cora is happy that her first WWE gold medal is with her best friend, and Roxanne is thrilled that her rise has happened so quickly, and next week she’s ready, she wants to cash in her contract for a match for the headline on Mandy Rose to end Toxic Attract once and for all.

Cameron Grimes and Bron Breaker share a moment before their title match.

Apollo Crews walks backstage to send us to the break.

Back from the pub, Apollo Crews enters and gets on the microphone.

He says he wants to share something with us. Last year, when he came home, he would ask his kids what they thought, and they would say “daddy, that’s not you” and eventually stop watching. Since returning to NXT, he’s proud to say his kids watch every week, and his kids’ enthusiasm rekindles that spark in his career.

He says Xyon Quinn was right in that things are different now, and NXT is full of hungry young talent, and now he’s asking what the fight against Tony D’Angelo or Nathan Frazer or Carmelo Hayes or Grayson Waller would be like, and Cameron Grimes would do in-ring magic with him.

He says he can’t help but notice that he was left off Crews’ shortlist and could top him in every way, in his own style. Apollo is challenging him to a match right now but Giovanni says he’s not fooled, he’s dressed for a night out. But next week they can find out.

And that gives her seven days to find a good excuse to tell her children.

She says Diamond Mine has an ego of course, but Diamond Mine is forever and not just a catchphrase. She interrupts the bickering between Tatum Paxley, Kayden Carter, and Katana Chance and tells Tatum to see her at the dojo, tomorrow morning.

Carmelo Hayes says they were boys, but when you play Melo, you play yourself.

And so we’re going to take a break.

Back from the commercial, we get another vignette of JD McDonagh which focuses on his technical wrestling and striking abilities.

Bron Breakker is examined but refuses the bandage when the doctor goes to bandage his shoulder.

Back from the commercial, Waller with an upper wrist lock, face pace jockey for position, Hayes with a pump kick, Grayson ducks, electric chair, escape, La Mistica… NO! Arm Trap cross face, Waller crawling, Carmelo backs him up in the middle of the ring but he reverses hairpin and he breaks to kick out!

Grayson with a triangle, a folding press, a kick, a big boot! The two men exchange right hands, the gas tanks turn, Hayes lights it, lariat springboard! Jockey on a springboard, Waller hits the Stunner but the champion A goes out of the ring! Wes Lee comes out of nowhere to eliminate Trick Williams, Carmelo in the lead…

Carmelo Hayes wins via pinfall with Nothing But Net to retain the NXT North American Championship.

Xyon Quinn is interviewed and says Apollo Crews shouldn’t be so quick to watch it, and NXT 2.0 is about the future, and it is the future.

Damon Kemp and Roderick Strong enter to send us to the break.

Back from the pub, Mandy Rose is interviewed.

She says it’s happened before and Gigi and Jacy have corrected the course and won the titles, and once the adrenaline wears off, Roxanne Perez will realize what a mistake she made and join her girlfriend Cora. in the failure club, if it even makes it to the game.

We get a Chase U sticker on Independence Day.

A student named Chad contradicts Andre Chase and he yells at him, then Thea Hail organizes a field trip to London and he is all for it.

Brutus and Roddy to start, Creeds under control, tags done and Kemp comes in with a go-behind only to parry a lariat! Get down, jump, butterfly suplex! In the corner, jockey for position, strong tags, forearms, tag to Damon and they start to unbalance Creed.

Kemp retrieves the fallen body, Brutus from the top with the Brutus bomb on the ground and we’re going to break!

Back from the commercial, Kemp smashes a Creed into the corner, tag, Strong knees on Brutus, Damon with shoulder strikes and a Superman Spear, only two! Tags done, Julius and Roddy laying on top of each other, Creed with a slam, a belly-to-belly suplex, another, a wheel slap!

After the match, Diamond Mine all stand together in the ring, with Roderick staring at the Creeds.

We get a thumbnail for a man who talks about translating his gift for math into a keen sense of struggle, and he calls himself Axiom.

A video package for our main event follows.

Back from publicity, Robert Stone, Sofia Cromwell and Von Wagner are interviewed.

They complain to fans as to why Von is not booked for tonight’s show.

Solo Sikoa comes in and says you don’t see him running around yelling apologies, and Wagner says they don’t speak for him and if Solo wants his mouth to speak, they can handle business right away. A fight almost breaks out but agents (including Norman Smiley!) separate them.

Collar and elbow, corner, escaping, side header from Breakker, sliding down to block shot, shot on second down but Bron stays close, rolls, inverted delayed vertical suplex in small package but Grimes doesn’t can’t seal the deal like that!

Off the ropes, dodge the chop, Bron destroys it with a lariat and we’re going to smash!

Back from the commercial, Grimes a flurry of kicks, targeting the wrong shoulder with kicks and a hammer. Bron comes back with a spinebuster but he can’t capitalize because of his swollen shoulder! Off the ropes, Cameron’s crossbody powerslam… SO CLOSE! Breakker hits a Frankensteiner avalanche… STILL NO!

Dodge the charge, Grimes gets an octopus grab but Bron straightens up and Cameron slides in to throw him shoulder first into the post! Cave-In… BREAKKER FINDS A WAY TO STAY IN THE FIGHT! Upstairs, Bron meets him…

Bron Breaker wins by pinfall with a spear to retain the NXT Championship.

After the match, JD McDonagh arrives and attacks Breakker, putting him through a table full of 4th of July foods and such. He says the necessary evil is there.

This is the show, folks.