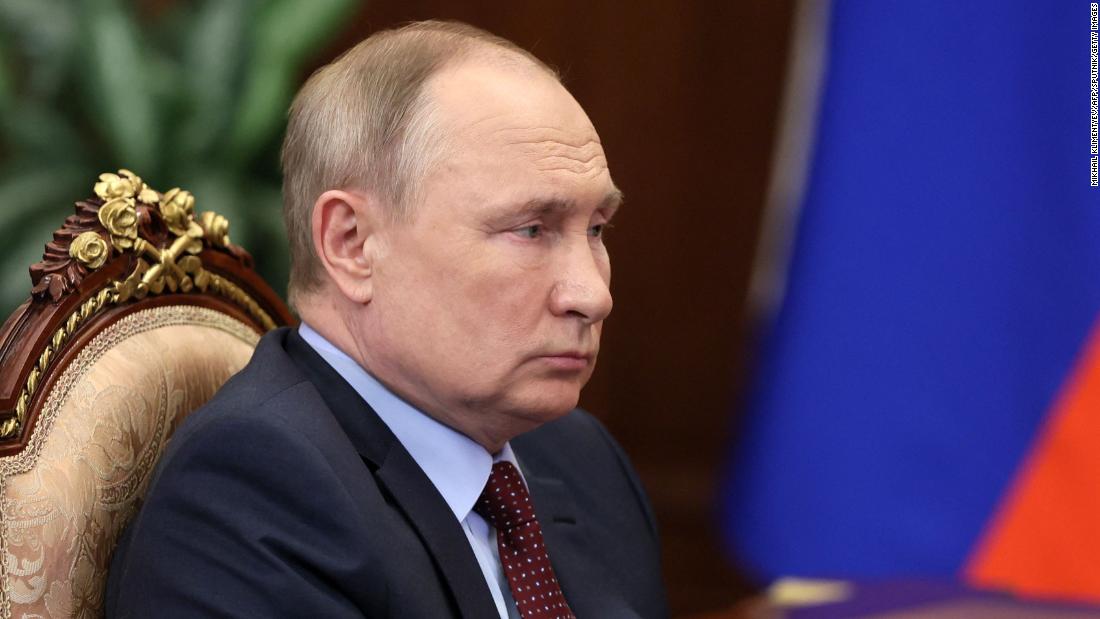 Putin’s autocratic vision is of a ‘Russian world’

By Maureen R. Sutphin Last updated Mar 8, 2022
Share
Ukrainians are fighting for their country and for their lives. The United States fears that Putin’s henchmen have a “kill list” of Ukrainians to attack or detain if Russia takes control.

Meanwhile, his government has tightened its grip on the media to control what Russians see and think.

Censorship. A new law makes discrediting the Russian military punishable by heavy fines or up to 15 years in prison. The law against “fake news” prohibits referring to the military operation in Ukraine as an “attack, invasion or declaration of war”.

International media have expressed fear for their journalists in Russia.

Last week, CNN spoke with Russians who don’t believe their government, those who accept what they see from the government, and others who don’t know what to think.
Mass arrests. More than 13,000 people have been arrested in Russia during anti-war protests, according to an independent monitoring group, although CNN cannot verify the numbers.
That’s what dictators do. Such governmental controls over life and information are the hallmark of dictators, of which Russia has had its share. Putin’s reign is the second longest after Joseph Stalin, the communist leader whose image Putin tried to rehabilitate.

authoritarian Russia. “It’s been authoritarian for a long time, it’s getting worse and worse,” Beth Sanner, a former deputy director of national intelligence, told CNN’s Abby Phillip on Sunday, when asked if Russia was heading towards totalitarianism – or the state controls all aspects of life.

Sanner pointed to reports that some Russians are fleeing the country.

Should the United States learn to live alongside dictators? Sanner appeared alongside Washington Post columnist Josh Rogin, who said Russia’s democratic experiment was a failure – and it’s something the United States and the West need to start dealing with.

“We have to look at the idea that democracies and dictatorships can co-exist,” Rogin said.

“The way we move forward is that we realize that these dictatorships are not there to work with us,” he added.

Isolated, more and more. Russia is already increasingly cut off from much of the West. Netflix and TikTok have announced that they will join the list of companies suspending all or part of their services in Russia.

There are growing calls to isolate Russia with additional sanctions. The United States is considering easing sanctions on Venezuela to make room for more non-Russian oil production.

“We don’t need to fund these murderous dictators who mean us harm and who want to replace the United States, which rules the world’s democracies, with its version of totalitarian regimes,” said Rep. Mike Waltz, a Republican. from Florida, to CNN. Pamela Brown on Sunday.

It is a unique challenge, for a world that has become so interconnected due to globalization, to deal with a nuclear-armed autocratic leader bent on nationalist expansion.

Call it what it is. Putin’s goal in all of this isn’t so much control as some sort of Russian empire, according to Fiona Hill, the former White House official and Russia expert, who likened Russia’s efforts to extend today to those of Germany before the Second World War.

“People don’t want to talk about Adolf Hitler and World War II, but I will talk about it,” she said. told Politico in a must-see interview last monthnoting that she did not refer to the Holocaust, which should always be “the major element when you talk about WWII”.

“But let’s focus here on Germany’s territorial expansionism, which Germany did under Hitler at that time,” she said in the interview, in which she described the expansion of Germany over the years and concluded, “…here is Vladimir Putin doing the exact same thing.”

Longer term – since 2008 – Putin has been slowly acquiring land, bringing his neighbors under his control and setting the precedent he can take by force anyone who resists.

There are growing fears that Putin could act against other countries, particularly Moldova.
“Russkiy Mir.” Hill also points to Putin’s belief in a “Russkiy Mir” or Russian world.

“He says Ukrainians and Russians are one,” Hill said. “This idea of ​​a Russian world means bringing together all Russian speakers in different places that once belonged to Russian tsarism.”

Putin will at least theoretically have to stand for re-election in 2024, when his main rival Russia, who survived poisoning and was banned from running for office, could still be held in a penal colony.
Putin on totalitarianism. Putin said in 1996 — at a time when his country was turning toward democracy after decades of communism and making the transition to national government — that a strong hand might be needed to control Russia.

“As sad or frightening as it may seem, in my opinion, a turn towards totalitarianism for some time in our country is possible,” Putin said, according to a video posted by the Russian channel. Lenta and broadcast on CNN.

The extended clip is about him pushing Russian democracy but acknowledging a Russian tendency to seek comfort in a strong hand, according to CNN’s John Avlon, who discussed the clip on “New Day.” It’s a stretch to think he was referring to himself. In the next line, according to Avlon, Putin says, “Sometimes this strong hand can strangle us.”

A refugee crisis. Hill is not alone in seeing stark comparisons between Russia’s current expansion attempts and those of Germany.

“Historically, I remember Hitler’s invasion of Poland, the country I’m in right now,” Rep. Michael McCaul of Texas, the top Republican on the US Foreign Affairs Committee, said Sunday. the House, to CNN’s Jake Tapper.

McCaul is in Poland with other US lawmakers to witness the exodus from Ukraine. Nearly a million Ukrainians had fled to Poland, according to estimates on Sunday.

“It seems eerily similar, and watching these refugees come out of Ukraine… 1.5 million in the last week and a half, and they say it’s only going to get worse as the noose tightens around the neck of Ukraine,” he said. .