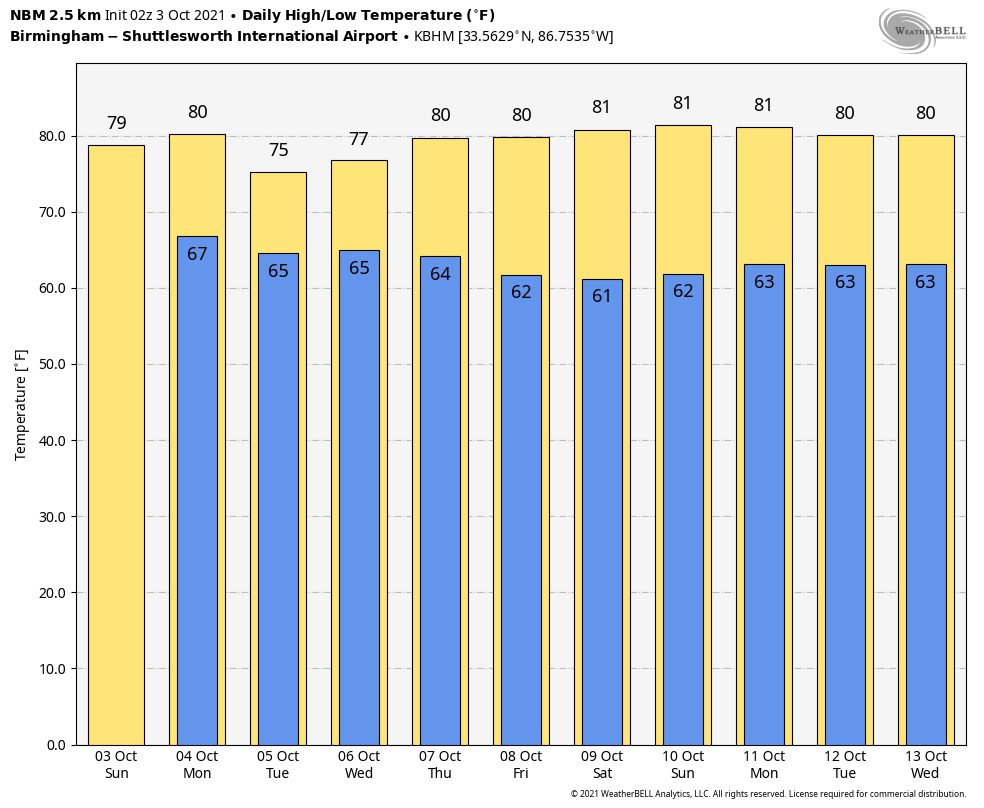 It’s race day in Alabama! The Yellawood 500 is set for 1 p.m. today at Talladega Speedway. Tens of thousands of NASCAR fans had better extend their hotel reservations one more night due to the high risk of rain. Let’s get into the details of a potentially wet forecast.

LET ‘EM GO HAROLD: The familiar cry of the Talladega fan in the’ 80s, urging the starter to drop the Green Flag. I think we will be able to compete in the race today, despite the high chances of rain. Keep your rain gear on hand if you’re on the trail today. But the showers, even if they will be heavy, should be spaced far enough apart to let them go!

ON THE WEATHER MAPS: There is weakness in the ridge over the southeastern United States. On top of that, humidity levels are very high, with precipitable water values ​​exceeding 200% of normal. A short wave passing north of us today will help stir the pot and produce the good chance of rain today. Rainfall can be heavy at times, but we’ve been dry enough lately to contain any potential flood threat. The peaks in the region today will be in the upper 70s.

NEW WORK WEEK: The trough will amplify and extend southwest over the next two days, eventually closing in an upper low over the lower Mississippi Valley. Some slightly drier air will try to work behind a front that reaches northwest Alabama on Monday, but it will stall near I-59 on Monday night. The upper low will force the front to retreat northwest on Tuesday. Alabama will remain in the soup and the chances of rain will remain high on Monday and Tuesday. The peaks will be in the upper 70s. The lowest will be in the 1960s.

MID-WEEK: The upper minimum will gradually weaken and open, leaving weakness over the Deep South. Chances of rain will remain fairly high on Wednesday, but will start to diminish as we head out later in the week. Highs until the end of the week will be in the upper 70s. The minimums will be close to 60F.

NEXT WEEKEND: The upper low should be a thing of the past Saturday, and the result will be decent fall weather. The highs will be in the lower 80s, the lows in the lower 60s. The risk of rain will be almost non-existent.

VAUDOU TERRITORY: It seems that another cold front will sweep through the region on Thursday evening the 14th. This will set the stage for a beautiful fall weekend where the peaks will be in the upper 60s and 70s and the troughs in the years 40 and 50.

TROPICS: Hurricane Sam was impressive to say the least, maintaining its Category Four status for almost 18 hours over an 8-day period that finally ended yesterday afternoon. This places Sam in the top ten for all hurricanes in the Atlantic for consecutive days at Category 4 intensity. With the max wind speeds diminishing slowly, Sam is located 650 miles northeast of Bermuda, accelerating towards the south. northeast, heading towards the open Atlantic. It swept through the island nation on Friday night, producing gusts of wind to around 35 mph and a few light rain showers. Elsewhere, Victor was the victim of strong southwestern shear and much dry, dust-laden Saharan air off Africa. It is expected to be lowered to a residual low today. Nothing else threatens to turn into a tropical cyclone over the next five days. Our eyes will be on the Western Caribbean in about a week to ten days as an upward momentum of the Madden Julian Oscillation moves through the region, which is favorable for climate development at this time of year.

WEATHER ON THE GULF COAST: Showers and storms are a good bet along beautiful Alabama and Northwest Florida beaches in the coming days. Return currents shouldn’t be a problem, with surf heights around 1 foot except near thunderstorms. The highs will be in the lower 80s. The lows will be near 70. Water temperatures are around 80F.

DANCE WITH THE STATS: Three inches of snow Friday in Fairbanks AK was a record for the date.

LOOK THROUGH PRISM: Monthly temperature data from the PRISM Climate Group for September shows that most of Alabama was comfortably mild to slightly cool. It has been a feast or famine in the north and center of the state, with some areas drier than normal, others much wetter. Even in Jefferson County alone, much of the real estate was a lot drier than normal, but I picked up 4.08 inches here just off Acton Road and I-459, a bit above normal for this period.

ADVERTISE WITH US: Get your message out to a very engaged audience by advertising on the AlabamaWX.com website. The site has received nearly 27 MILLION page views over the past 12 months. Do not miss! We can customize a creative, flexible and affordable package that will meet the needs of your organization. Contact me, Bill Murray, at (205) 687-0782 and let’s talk.

WEATHERBRAINS: Hope you listened to or watched last week’s fabulous show with former National Hurricane Center director Dr. Neil Frank. He is 90 years old and still looks like he was when he ran the Center in the 70s and 80s. Check out the show at www.WeatherBrains.com. You can also subscribe on iTunes. You can watch the show live at: http://live.bigbrainsmedia.com/ You will be able to watch the show on the James Spann Weather Channel 24 × 7 on cable or directly on the air on dot 2 stream.

AT THIS DATE IN 1963: Hurricane Flora crosses the southern coast of Haiti, then winds through eastern Cuba for the next five days, lashing the island with winds of 100 mph or more for 100 hours or more . Rainfall amounts were astronomical, with up to 90 inches reported near Velasco. More rain was reported at Guantanamo Bay from Flora than during the whole of 1962. Flora is the second deadliest hurricane in Atlantic history, with more than 7,000 deaths. Follow my weather history tweets on Twitter. I’m @wxhistorian on Twitter.com.