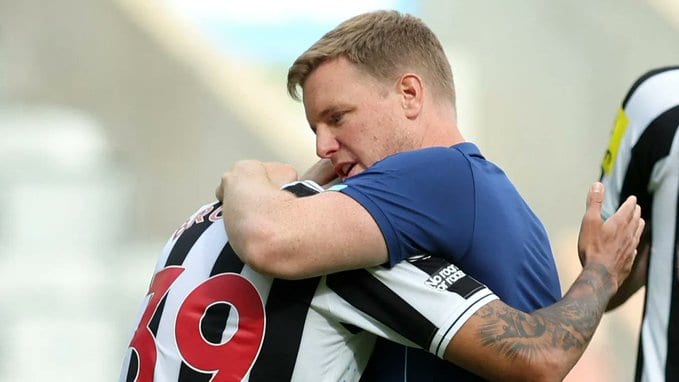 Newcastle start the new season with a superb performance and three points against Nottingham Forest this afternoon. The Toon Army witnessed a dominant outing from their Magpies en route to a 2-0 win at St. James’ Park.

Quality moments from Fabian Schar and Callum Wilson were worth the wait as Newcastle went level on the break despite a dominating first half. Quality shone in the end as the Magpies were too much for Forest.

Eddie Howe picked his team well, with every player on the pitch making the difference. Dan Burn was superb at the back while Joe Willock’s performance could keep Sean Longstaff on the bench next weekend at Brighton.

This performance gave everyone a boost despite an already buoyant mood on Tyneside. After the game, a delighted Howe spoke about the positives of today’s great show. Here is what the boss said as published in Newcastle World:

“I feel very positive after seeing that – I thought the players were excellent from start to finish. It was a performance full of promise.

“I will always push the players for more – I said at this half we had produced a very positive performance until the last action. We have to be more ruthless because we know this league can be difficult.

“The icing on the cake was missing – Fabian brought it. When he was queuing to shoot, I questioned his decision but it was the right one. He is capable of the unexpected.

“We have a few weeks left to try to find the right player who will make the difference for us.”

It was a perfect start to the campaign. On the back of his new contract, Howe showed that his fingerprints are now all over this team. The pre-season went very well and today’s game shows that there is something to look forward to moving forward.

Here is the first of many team photos after the hopefully victory.