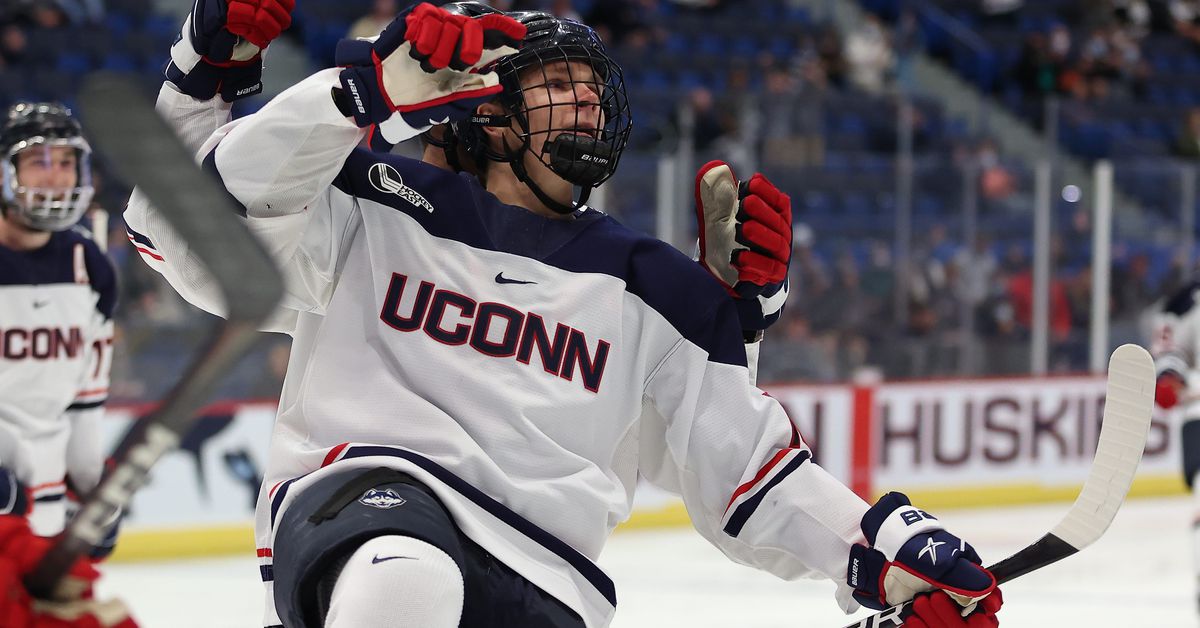 UConn’s men’s hockey started their season with a 6-3 victory over the Sacré-Cœur Pioneers – the Huskies had a one-goal lead before a pair of empty-net goals in the final 46 seconds.

“I don’t think it was the best game we could have played, but we did, which is most important,” said Jachym Kondelik.

Vladislav Firstov opened the scoring on UConn’s first shot of the season at just 1:05, but Sacred Heart equalized minutes later. The Huskies regained the lead in the dying minute of the first period with a power play goal from Ryan Tverberg and added another from Firstov midway through the second to make it 3-1.

The tide quickly changed, however, as Sacred Heart hit back with a pair of runs to tie the game at 3-3 at the start of the third period. With just over seven minutes to go, Jachym Kondelik completed a magnificent backhand enveloping goal to put the Huskies ahead for good.

Sacré-Cœur retired its goalkeeper with one minute left, but Kevin O’Neil and Marc Gatcomb both registered empty nets to put the game aside.

“I thought it was a good win for our team,” said UConn head coach Mike Cavanaugh.

Each of UConn’s special team units dominated. The Huskies committed four penalties (all in the first two periods), but they held on and allowed no power play goals.

“We did a good job putting pressure and saving ourselves time and space,” Cavanaugh said. “Even with the pressure on the ice, we were able to disrupt the pace of their breakaway on the power play and they really weren’t able to attack with a lot of speed in our zone.

On the other side, UConn only had one power play but took full advantage of it. The Huskies won the initial faceoff and made a few quick passes before Hudson Schandor found Tverberg on the other side of the ice, who buried his shot in the top corner.

At the end of the game, UConn held Sacré-Cœur in his own zone for a long time, which forced the Pioneers to keep their goalie in the final two minutes. They ultimately pulled him out with a minute left, but the Huskies made them pay off when O’Neil beat a defenseman along the boards and ended the chance in an empty net off the blue line.

Still chasing the deficit, Sacred Heart pulled his goalie out again, but UConn’s aggressive defense paid off when Gatcomb intercepted a pass and took it along the ice for the sixth goal of the evening.

“When they took the goalie out, I thought we had executed really well and both nets were empty and we were able to seal the game,” Cavanaugh said.

UConn scored three special teams goals – one power play and two empty goals – while Sacred Heart scored none. This turned out to be the difference in the 6-3 game.

Hanson wins in his debut

After winning the goalie competition in the preseason, Darion Hanson saved 28 of the 31 shots he faced and also added his first career assist.

Hanson could have done better on Sacred Heart’s opening goal – he was beaten on the glove side on a relatively clear shot from a distance – but he admitted his mistake.

“I’m sure he would like to get that first goal back,” Cavanaugh said. “To his credit, he came right up to our bench and said, ‘Hey guys, this is mine,’ and we were like, ‘Hey, don’t worry about that. We shouldn’t leave this guy open.

From there, Hanson made a handful of big saves – including one at the end of the first period when he went through his crease and made a glove save on the back post to maintain the lead.

“I like the way he responded,” Cavanaugh said. “He didn’t shrink after that (first) goal and made some huge saves.”

UConn had the faceoff circle in the first period with a 17-8 advantage and finished the game with 37 wins against 27 for the Sacré-Coeur. defensive zone.

“I thought UConn really dominated the faceoff in the first two periods against us,” said Marottolo. “We didn’t have the puck as much as we would like.

During the pre-season, Cavanaugh said junior Vladislav Firstov “has the potential to be one of the best forwards in the league.”

On Saturday he showed why. Firstov was the best player on the ice, turning on the lamp twice while taking a penalty that led to the Huskies’ power play goal. On his first score he landed a shot at the far post from the top of the circle and on the second he shot from behind the net, bouncing the puck off the goaltender’s back and into the goal.

“I thought he was electric when the puck was on his stick. He really was, ”Cavanaugh said. “He took that penalty which gave us a power play goal, made some really good offensive plays and I thought he had competed hard all night. We’re going to need him to be the type of player if we are to continue to compete for a league title.

“It has been a difficult game for us to find a way to win over the last few years. – Cavanaugh finally beating the Sacred Heart.

UConn will begin playing Hockey East next weekend with a two-way series with Boston University, which kicks off Friday at the XL Center.