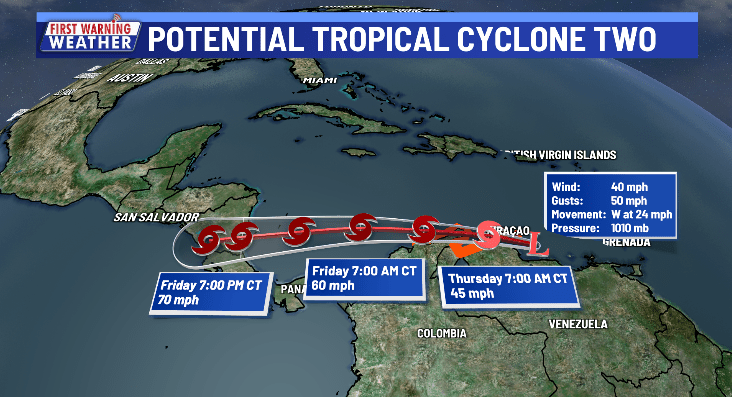 A relatively new term used in the tropical meteorological community has left some confused as to its actual meaning. The term “potential tropical cyclone” began being issued by the National Hurricane Center (NHC) in 2017.

A potential tropical cyclone is an area of ​​tropical low pressure that is at risk of developing into an organized storm system such as a tropical depression, tropical storm, and in some cases, a hurricane.

According to the National Weather Service, the NHC “has the ability to issue advisories, watches, and warnings for disturbances that are not yet a tropical cyclone, but threaten to bring on tropical storm or hurricane conditions. on land within 48 hours.”

In August 2021, Potential Tropical Cyclone Seven formed in the eastern Caribbean Sea and rapidly intensified as it tracked west. It would eventually become Tropical Storm Grace and later Hurricane Grace, strengthening to a Category 3 before making landfall on the east coast of Mexico.

The recent addition of “potential tropical cyclone” to the list of tropical classifications is extremely beneficial as it allows the use of warnings and advisories to help inform more people of the impending danger presented by the storm.

If a potential tropical cyclone strengthens, it goes through several different classifications as it expands and organizes. These classifications are defined chronologically as a tropical depression, a tropical storm, and a hurricane. The Saffir-Simpson scale is used to classify hurricanes specifically based on sustained wind speed. Strength categories range from 1 to 5, with 5 being the strongest.

Potential Tropical Cyclone 2 is currently moving across the southern Caribbean Sea, just off the northern coast of South America. It evolves quickly, but does not strengthen very quickly. It is currently forecast to make landfall in Central America as a tropical storm on Friday evening.

How Humanity’s Prosperity Depends on the Health of Our Oceans