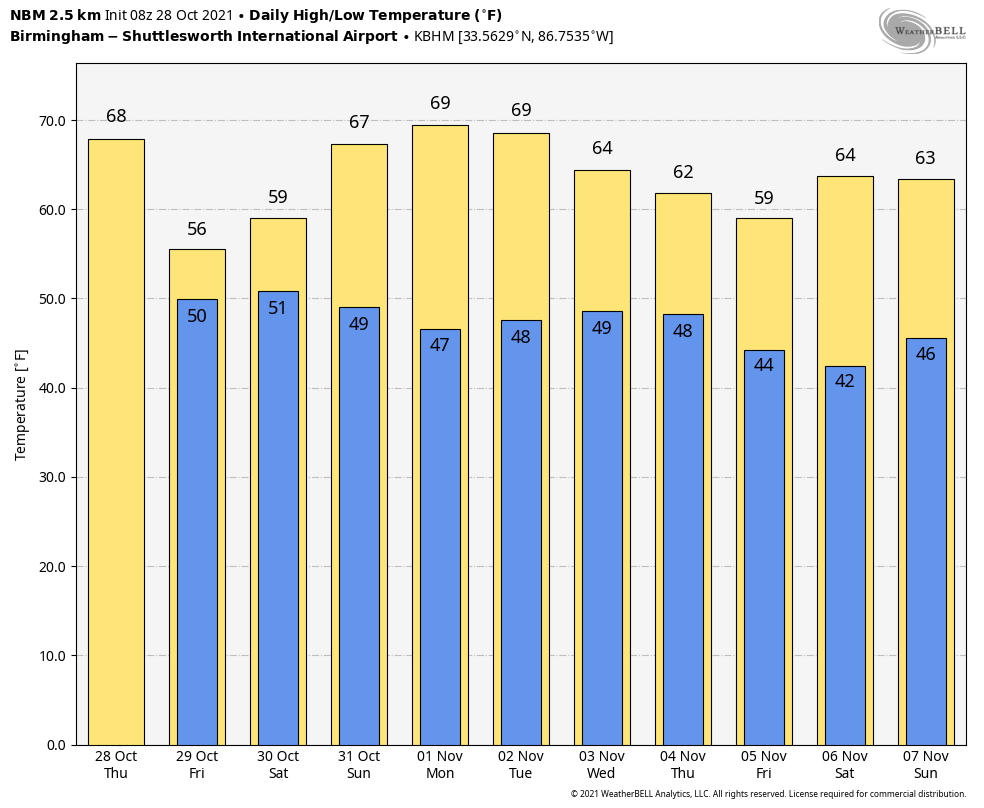 Windy and cool; Rain at times: the Alabama weather blog

HOLD ON YOUR HAT: As expected, it’s a very windy morning in Alabama. Gradient winds (not related to thunderstorms) are gusting to 30/40 mph in places, and a wind advisory remains in effect. The wind will subside later in the day as the slope relaxes. Showers continue as a deep upper low develops just northwest of Alabama this morning. A dry window will likely bring some sun later this morning, but clouds will return to the state this afternoon. The day will be noticeably cooler with temperatures mostly in the 60’s and mid-range. The average maximum for Birmingham on October 28 is 71.

TOMORROW OVER THE WEEKEND: Tomorrow will be even colder as the upper low just to the north will bring dynamic cooling to the state. Temperatures will hover between 50 and 54 degrees most of the day over the northern half of the state, with a low of 60 degrees over southern Alabama. Clouds linger with light rain or drizzle at times over northern and central counties. It will look more like January.

For Saturday, we expect a decent amount of sunshine for the southern half of the state, but clouds will persist over northern Alabama with occasional light rain or drizzle, particularly in the areas north and east of Birmingham. Again, the maximum won’t be until the mid-1950s over the northern half of the state, with temperatures around 70 over southern Alabama. Then, on Sunday, the sun returns across the state with a high between 68 and 73.

NEXT WEEK: There could be a little light rain Tuesday evening with a cold front, then again on Thursday as an elevation trough approaches, but for now we don’t expect very heavy rain or strong thunderstorms. Temperatures will remain below average… most days the highs will be in the 60s and lows in the 40s. See the Weather Xtreme video for maps, graphs and more details.

TROPICS: A non-tropical low pressure system producing storm force winds is located approximately 350 miles south of Halifax, Nova Scotia. Strong winds along parts of the northeast coast of the United States are expected to gradually abate later in the day as the low moves eastward away from shore at around 15 mph. The low is then expected to turn southeasterly towards slightly warmer waters in a few days, and it could acquire subtropical characteristics over the weekend or early next week over the central Atlantic. The rest of the Atlantic basin is very calm.

FOOTBALL TIME: For the high school games on Friday, the sky will be cloudy with some possible light rain; temperatures will hover around 50 degrees in most stadiums.

For the college games on Saturday …

WEST ALABAMA TO NORTH GREENVILLE (11:00 am CT kickoff in Tigerville, SC): The sky will be mostly cloudy with some occasional showers possible during the game; temperatures will be between 58 and 62 degrees.

SAMFORD AT VMI (12:30 pm CT kick off in Lexington, VA): Expect cloudy skies with a chance of rain at times… temperatures will be in the mid to 50s.

CENTRAL ARKANSAS IN JACKSONVILLE STATE (Kick off 1:00 p.m. CT at Burgess Snow Field): Skies will be mostly cloudy with some light rain or drizzle possible; temperatures will be between 55 and 59 degrees during the game.

ALABAMA STATE VS ALABAMA A&M (kick off 2:30 p.m. CT at Legion Field, Birmingham): the sky will be mostly cloudy for the Magic City Classic with occasional light rain or drizzle; temperatures will be between the middle and upper 50s.

BIRMINGHAM SOUTHERN AT BERRY COLLEGE (3:00 pm CT kick-off at Mt. Berry, GA): cloudy skies during the game with some light rain possible; temperatures will be between the middle and upper 50s.

STATE OF ARKANSAS SOUTH ALABAMA (Kick-off 4:00 p.m. CT at Hancock Whitney Stadium): Skies will generally be clear with temperatures rising from near 68 at kick-off, through to the 1950s in the second half.

OLE MISS AT AUBURN (6:00 p.m. CT kick off at Jordan-Hare Stadium): Overall, temperatures drop nearly 54 degrees on kickoff to 40 degrees in the second half.

AT THIS DATE IN 1999: A super typhoon, known as Cyclone 05B, hit the equivalent of Category 5 hurricane that day. This storm is the strongest tropical cyclone ever recorded in the northern Indian Ocean. Cyclone 05B hit Indian state of Odisha near the town of Bhubaneswar on October 29. It is estimated that 10,000 people died from this cyclone and 1.67 million people were left homeless.

WEATHER BRAIN: Remember you can listen to our weekly 90 minute show anytime on your favorite podcast app. It’s the weather show with many familiar voices, including our meteorologists here on ABC 33/40.

CONNECT: You can find me on all major social networks …

Look for the next Weather Xtreme video here before 3:00 PM this afternoon… enjoy the day!